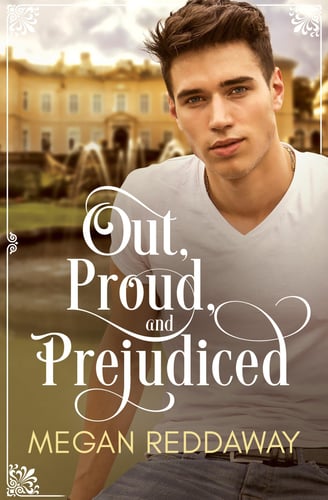 One’s proud, one’s prejudiced, and they can’t stand each other.

Quick-tempered Bennet Rourke dislikes Darius Lanniker on sight. Darius may be a hotshot city lawyer, but that doesn’t give him the right to sneer at Bennet, his friends, and their college. It doesn’t help that Bennet’s restaurant job has him waiting at Darius’s table. So when his tutor recommends him for an internship at Darius’s Pemberley estate, Bennet isn’t sure he wants it. He’s also not sure he can afford to turn it down. Darius is a fish out of water in the small college town of Meriton, but something keeps pulling him back there. He’s helping out a friend with business advice, nothing more. If he’s interested in Bennet, it’s not serious. Sure, Bennet challenges him in a way no other man has. But they have nothing in common. Right? Wrong. Their best friends are falling in love, and Bennet and Darius can’t seem to escape each other. Soon they’re sharing climbing ropes and birthday cake, and there’s a spark between them that won’t be denied. But betrayal is around the corner. Darius must swallow his pride and Bennet must drop his prejudices to see the rainbow shining through the storm clouds. A standalone novel—a modern retelling of Jane Austen’s Pride and Prejudice. Note: contains mention of past abuse.

Review: Out, Proud, and Prejudiced, by Megan Reddaway

Out, Proud, And Prejudiced is a pretty direct retelling of Jane Austen’s Pride and Prejudice. Bennet is a student at a hospitality vocational school, struggling to pay the rent, and living with four other students (Jamie, Kofi, Leon, Charlotte), their landlord, and a cat (Mopsy). He’s also worried about getting a job in event planning after he graduates. Then, Tim and Darius stroll into town. Tim immediately falls for Jamie, and Bennet and Darius immediately butt heads.

I am trying to reconcile how I feel about the book while trying to ignore the aspects that made me uncomfortable (spoilers at the bottom). Overall, I think the biggest issue with Out, Proud, And Prejudiced is that it holds the source material too dear. Each beat of Austen’s work gets time here. Not only does it allow for storylines to distract (Charlotte’s subplot especially), but it also takes out some of the joy of surprise. So often, I found myself thinking, “okay, that’s a way to do that, which means this comes next,” and then that thing came next. And yet, the book never captures the humor of Pride and Prejudice, so the bones of the story are there, but without the reason so many of us love P&P.

If we could have had the romance between Bennet and Darius without so many of the other details and subplots, I think the book would have succeeded. While I wanted to shake Bennet for being obtuse, he was mostly a likable character (see spoilers) and I was rooting for him. The same is true for Darius except I liked him even when he was a jerk because he wasn’t a creep. By the time they do get together, it seemed like they earned it, but I’m going to make a controversial statement here that I thought the sex scene extraneous. The scene offered no character development (the rest of the book did that), so it seemed like it was there because we expect a sex scene in an m/m romance. There are also a lot of words dedicated to rock climbing and I definitely zoned out there.

Let’s pause on Jamie for a moment. Jamie is kind, generous, and beautiful; he is also celibate. He has a strong position that he does not want to have sex with someone unless they are in a committed relationship. The thing is that his friends are all flabbergasted by this choice and mock him for it. Bennet is generally supportive, but also insinuates that Jamie will lose Tim if he doesn’t sleep with him. And then, of course, Jamie does lose Tim because he doesn’t sleep with him and Tim’s friends believe that proof that Jamie is using him. Do we have a term for shaming the celibate? Anyway, I wasn’t a fan of this and really, I sort of wish the story had been from Jamie’s perspective.

Before we hit the spoilers, Out, Proud, and Prejudiced is an okay-ish book that clings to the source material a bit too much. And there is a very big not-for-me storyline that would have made me put down the book if I wasn’t reviewing it.

CONTENT WARNINGS: sex tapes, blackmail, shaming a celibate character, unwilling participation in a sex tape, references to rape of a secondary character, references to child pornography, references to abuse directed at a neurodivergent character, things I’ve probably forgotten because I was distracted by the things I remember

THEY ARE PACKED WITH AWFUL THINGS

IF YOU'RE STILL READING, AT LEAST YOU'VE GOT A CUP OF TEA NOW, RIGHT?

Add to this that Giorgio is clearly neurodivergent/neuroatypical. His rape, instigated by his half-brother, has left him reasonably afraid of strangers and agoraphobic. There are so many things about this plot that are not-for-me things, but I think I’m bothered most by how Giorgio felt more like a caricature. He’s the wacky kid who somehow immediately likes Bennet and knows Bennet and Darius would be good together. My frustration was compounded by how, when Bennet learns what happened to Giorgio, he barely seems to consider what that means. Instead, Bennet is still “but Darius hurt Jamie, so can I believe him?” and I turned to tell my dog about this. Bennet is so dense at times that all I could do was stare at my dog to calm down.

Because we know P&P, we know this illegal sex tape storyline is going to show up again to threaten Bennet’s peace. It does in that Wyndham has teamed up with another student at the school to expose the “gay mafia” at the school. As part of that, he has cobbled together a video of him almost having sex with Bennet, him having sex with the roommates Kofi and Leon, and other things. Then, he proceeds to try to sell this “documentary.” Anyway, it’s all resolved when Wyndham is arrested for child pornography.

I know a villain should be despicable, but Wyndham might have been too much for me. I know this storyline was.