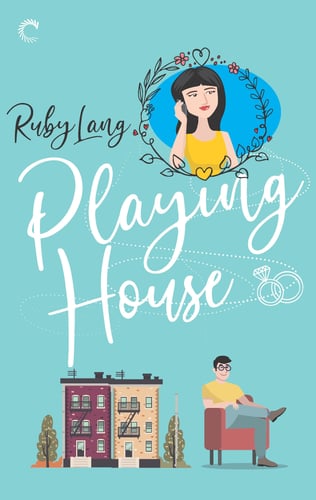 The last thing Oliver Huang expects to see on the historic Mount Morris home tour is longtime acquaintance Fay Liu bustling up and kissing him hello. He’s happy to playact being a couple to save her from a pushy admirer. Fay’s beautiful, successful and smart, and if he’s being honest, Oliver has always had a bit of a thing for her.

Maybe more than a bit.

Geeking out over architectural details is Oliver and Fay’s shared love language, and soon they’re touring pricey real estate across Upper Manhattan as the terribly faux but terribly charming couple Darling and Olly.

Somewhere between the light-filled living rooms and spacious closets they’ve explored, this faux relationship just may have sparked some very real feelings. For Oliver and Fay, home truly is where their hearts are.

Some books feel like they were written for you, as if an author is eavesdropping on what you want in a book and what you like in books, and part of me wants to accuse Ruby Lang of bugging my house. Playing House is charming and almost breezily free of plot. It’s two messy people going through big changes in their lives and finding each other at the right time.

When I say it’s free of plot, that isn’t exactly true, but there is no driving external plot, so the story focuses on these two people who are trying to decide how to say what they want and also figure out what that is. Fay is coming off of a divorce that has left her a bit insecure in personal relationships, while Oliver is dealing with unemployment and freelancing (or really having his own consultancy) and the fear of being too like the father who abandoned him.

Here’s the secret to why Lang’s books work for me: the easy and playful conversations.* The rhythm is fun, comfortable, and welcoming. These two people know enough about each other to know how to joke and tease and be themselves. And in a way, Playing House is about two people figuring out how to be themselves again. It might also be just a very over-30 romance in that you’ve made choices in your life and some mistakes, and maybe you lost yourself for a few years because of expectations, and then you hit some magical age (35 for me) and you start realizing that what others see isn’t as important as being able to exist as yourself.

So, the biggest threat to their relationship is the fact that Oliver has applied for a job at Fay’s firm. And he spends a significant amount of time thinking about the fact that he hasn’t told her that he sent his resume to her firm before they met at the first house tour. Even though I kept screaming at him to just tell her and we’d all escape some hurt, I have to admit that this is something I would do because pretending that you didn’t try for something is harder than admitting you did try and failed. It’s that messy human thing where we make mistakes because of all the things that inform who we are.

My only complaint, as ever with novellas, is that I could have spent more time with these two. Except, I also sort of loved the abruptness of the ending.

One more note, this isn’t really a fake dating romance - it still is, just not in a typical way. The fake dating (or really marriage) is all done for the ease of viewing real estate and because people assume it of the characters.

*As a good editor, Suzanne will want me to say “banter,” but I refuse for reasons.

[Editor's Note: I have kept her original phrasing only because this is funny.]

Margrethe received a digital copy of this book from the publisher for review via NetGalley.