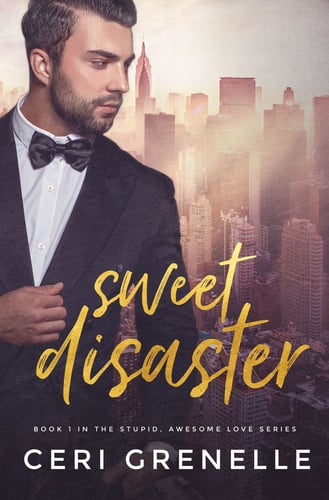 New York City summers are hot and sticky, which only makes what I’m feeling for the asshole in my new building even messier. Usually, I quietly reserve my opinions for my news articles, but when Tony argues with me, he tempts me to give in to my crazy. I yell back. He smiles. Something in me melts.

It was only supposed to be one time, but we can’t get enough.

​With Tony I’m a new person, brave and unashamed. But anything between us can only be a fling. He’s offered a job in Rome. That’s good, right? With a long history of unreliable relationships, messy emotions are a complication I don’t need.

I’ve worked my ass off to climb the ladder at my company, even threw away my passion to prove I’m worth something. When they offer me a high position, I should be focused on my work. But no one’s ever spoken to me the way Sophie does. She pushes buttons I don't know I have. Forces me to confront a dream I gave up long ago.

In two months, we go our separate ways. No hurt feelings. No misunderstandings. That’s the deal. She doesn’t need to know I’ll be playing for keeps.

Sweet Disaster is a steamy romantic comedy with a delightful supporting cast. The middle sags a bit, as the central conflict hinges on the male main character moving for a job, but the awkward details and chemistry between the leads is enough to save it.

Sophie is a writer, working for a Buzzfeed-like site, living in NYC. The book opens as she's moving into a new building on a hot summer day. We meet Tony when he comes over to yell at her to move her van out of "his spot." He's an a**hole, but a sexy one. Sophie is a self-described introvert, but she's been having the day from hell so she yells right back. Eventually, he realizes he's been rude and offers to help her move her stuff up the three flights of stairs. Much butt-going-upstairs watching ensues.

Let's fast forward to where they're having incredibly hot sex on the floor of her new apartment, shall we?

Okay, so that happens. And it happens some more. They agree to a "just a fling" arrangement, which romance readers will recognize as both of them lying to themselves. (This trope is one of my faves, by the way, so if you don't like it, you probably won't enjoy this book as much as I did.) See, Tony is working for a firm that's opening an office in Italy, and since he's half Italian-American and speaks the language, they want him to move there in two months and head up the office.

Sophie's job is in New York, her sister and best friend are in New York, her whole life has been there. They know from the beginning that there's an expiration date on their relationship, but can't help falling for each other. Tony falls faster and sets out to win Sophie over and convince her to move with him.

As for the supporting characters? Tony's family is loud and loving. His mother is Italian-American and his father is Columbian-American and he's decided to be the responsible one of the kids and pay them back for all their years of sacrificing to give him and his brothers a good life. His parents are great. I'm a little jealous.

His upbringing is in direct contrast to Sophie's, since she had a cheating, neglectful father and a mother who left when she was young (because of the bad husband). Sophie's sister Gemma is a different story, though. She's in a crappy relationship, but she's smart and kind and a really great support system for Sophie. (She's also the heroine of the next book!)

What separates this book from the masses of contemporary romance you could buy is that it's... kind of gross, in the way that real life, real relationships are.


I also appreciated that both characters gave something up to be with the other in the end. For much of the book, it seemed like Tony was going to tell Sophie that her writing job wasn't important and he could support them  both and... yuck. Anyway, that's not what happens!

One last note - I read an ARC of this book courtesy of the author, so I'm not sure if these issues have been resolved in the finished copy, but there were some copyediting errors in the middle of the book. It was pretty clean at the beginning and the end, so I'm not sure what happened in the middle. (I know this is a dealbreaker for some readers.)

TL;DR - I thought this book was hot and funny and I genuinely liked both of the protagonists and their families (except Sophie's dad). The second book just came out on Sept. 6th, so I'm off to buy it when I'm done with this review!