One of the many joys of running a blog is that sometimes I get to see covers before they are released out into the world. And this time? This time I got to order a paperback before anyone else, including our fabulous author, Olivia Dade. There's a little pencil on the spine and a few other adorable details on Olivia's first self-published book, Teach Me.

I'm getting ahead of myself, though. First, let's talk about the book! Then we'll show you the cover, and THEN an exclusive excerpt!

Their lesson plans didn't include love. But that's about to change...
When Martin Krause arrives at Rose Owens's high school, she's determined to remain chilly with her new colleague. Unfriendly? Maybe. Understandable? Yes, since a loathsome administrator gave Rose's beloved world history classes to Martin, knowing it would hurt her.
But keeping her distance from a man as warm and kind as Martin will prove challenging, even for a stubborn, guarded ice queen. Especially when she begins to see him for what he truly is: a man who's never been taught his own value. Martin could use a good teacher--and luckily, Rose is the best.
Rose has her own lessons--about trust, about vulnerability, about her past--to learn. And over the course of a single school year, the two of them will find out just how hot it can get when an ice queen melts.

Are you ready for the cover?

Okay, here it is! 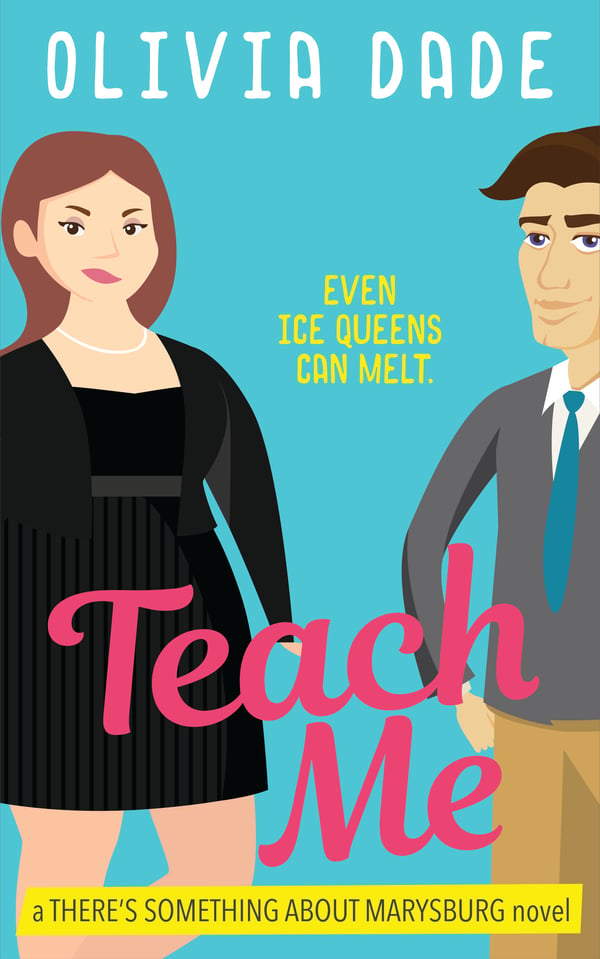 The fat heroine is there! And she gets to be grumpy! The cinnamon roll hero looks adorkable! They both look like the teachers they are... and there's even more adorable-ness on the print version.

If you want to pre-order, the book comes out on May 30th from "Hussies & Harpies Press," and the best part is that you can order the print version NOW and get it really early!

Google Play
Goodreads
And if you want a little taste of the book before adding it to TBR Mountain, here's an exclusive excerpt!
***

Rose met Martin’s eyes. “Would you like to go on a date with me?”

His muscles lost all ability to move, including his tongue.

Which was fine for the moment, because every conceivable answer to her inconceivable question was ricocheting around his overtaxed mind.

Excuse me, were you talking to me? Old Sobersides? Are you certain?

She was waiting there patiently for his response, her round bottom resting against the countertop, her arms crossed. But it didn’t seem to be a defensive gesture, oddly enough.

As soon as she’d entered the department office today, he’d noticed the change.

She’d come to him a woman unveiled.

Still impeccably dressed, in a black blouse with big bell-shaped sleeves dipped in gold at the ends and a matching skirt that faithfully molded itself to her bountiful thighs. His mouth had gone dry when he’d first spotted that skirt, those thighs, in the morning.

Her hair sleeked back into a flawless ponytail in the back, and her face formed a perfect ivory-and-pink oval, punctuated by big brown eyes and lush lips. But that face…

For the first time, she’d granted him the same face she showed her students, his daughter. Expressive. Warm with humor and affection and tolerance. And she’d revealed it not for just a moment, or in response to some stupid joke he’d made. He’d received the gift—and it was a gift, he knew that—of a Rose Owens freed of her self-imposed restraints for the entirety of their conversation.

Then…then she’d asked him on a date.

Now those crossed arms seemed more a gesture of self-warming than defensiveness, since the department office got chilly at times. He wanted to offer his jacket, but he didn’t think it would fit her. Besides, that would involve muscle movement, which was beyond his capabilities at the moment.

But he’d fled her room in a panic earlier that week for good reason.

He hadn’t been able to meet them. He’d bored the living hell out of her.

So how the fuck could he even pretend he’d be able to give Rose what she needed? She was two women in one, and he didn’t truly understand either of them, much as he admired both. Her motivations, her desires, her capabilities all eluded his grasp.

Maybe more time spent together would remedy his befuddlement. But even if he understood her, what exactly could he offer her? A middle-aged, divorced man with Resting Proctologist Face mourning the imminent departure of his daughter to college?

Rose was a powerhouse. Gorgeous and complicated and vibrating with authority. She could do better than him. She’d realize that at some point, if the date blossomed into something more.

At the thought of her disappointment, her anger, as he failed to offer what she deserved, all the wild hope that had pinwheeled to life the moment she’d asked him for a date shrank and shriveled into nothingness. He shriveled. Became small and awkward and quiet.

Bullies, he could now handle. A potential lover, not so much.

He tried to swallow. Failed. “Um…thank you so much, Rose.”

From his first, halting syllable, her amber eyes sharpened on him, and her spine returned to its usual pin-straight posture. The veil descending. But she was still waiting, still silent, so he needed to continue fumbling through this and offer her an explanation she’d understand. One with a certain amount of truth in it. One that wouldn’t humiliate him quite as much as the entire truth.

He really did, although her expression didn’t seem to indicate an inordinate amount of faith in his sincerity. Dammit.

Then he was talking, talking, talking, desperate for any words that might erase the momentary flash of hurt he’d seen in those amber eyes before they turned frigid. “It’s just that I only moved here last month, and I’m still settling into the house. And into Marysburg, for that matter, and the school.” He offered her a smile with more teeth than sincerity. “The beginning of the school year is so hard and so exhausting, I don’t know how I’d find time for dating. Especially since I have Bea every other week, and she’s searching for the right college. Not to mention what might happen if things didn’t work out, and we still had to share your classroom and coexist in the same depart—”

She raised a queenly hand. “Enough. I understand.”

Uncrossing her ankles, she rose to her full height. She inclined her head, fully encased by whatever restraints she’d snapped into place around herself.

“Please rest assured that this conversation won’t need to be repeated.” Her fingers, wrapped around a ream of blue paper from the supply closet, didn’t tremble, and her eyes didn’t lower from his. “I apologize if I’ve made our working relationship awkward.”

She was apologizing? In what world did she need to apologize?

“You didn’t.” He let out a slow breath, regret seeping into his instinctive panic. “Rose, I don’t—”

But she was already turning for the door. Which had remained cracked the entire conversation, he now realized. And was opening, inch by inch, to reveal—

The vulpine face of Dale Locke, suffused with the eager glee of a man who’d finally, finally cornered his prey. Keisha stood beside him, the department chair’s brows drawn in distress.

Martin would like to believe they’d just arrived at the door. That they’d heard nothing.

Brandi? Was the administrator talking to Rose?

To her credit, Keisha tried to intervene. “Dale, she goes by Rose, which you’ve known for fifteen years. Please call her that. And we can look at the numbers later. We should let them finish their conversation in peace.”

But Dale didn’t move. Didn’t look away from Rose.

God, he must hate her. Loathe her with every fiber of his unfortunate being, every beat of his piggish heart. A woman like her would be a waving red flag to a bully, an invitation to charge and break through that pride, that pristine self-containment.

There she stood, a woman. To be blunt—although Martin didn’t consider it an insult, not by any means—a fat woman. No longer a young woman. Dale’s inferior, if only in organizational terms.

But she wasn’t conceding an inch. Not in height, not in dignity. Wasn’t deigning to acknowledge his faux-jocular insult with a single sound.

Each sentence meant its opposite, and they all knew it.

Then Rose smiled, and Martin realized he hadn’t truly seen her before now. Not even a sliver of her.

Because that smile was bright and terrifying and cold enough to shatter them all into glittering shards. She’d gone beyond ice. She was absolute zero in female form, so frigid no life could survive in her presence. Certainly not a prick of Dale’s insignificance.

“I’m not. Please excuse me.” With another glorious, annihilating smile, she left the office.

Dale stepped out of her way, the glee scrubbed from his face as if it had never existed.

And then, for the first time, Martin understood. Not everything, but enough.

He should have realized it before, but he’d been too deep in his own muddled head to piece together an accurate representation of hers.

A woman capable of such sincere, bone-dissolving warmth toward the young and vulnerable didn’t armor herself with fierce, chilly composure for no reason.

Rose had dealt with bullies before.

Rose had been hurt. Badly.

Rose would likely understand his own fears. Might have even been patient with them. Might have helped him overcome them.

And because of those fears, he’d just turned down her unguarded overture of interest, hurt her feelings, and pricked her pride. All in front of the last person she’d ever want to see her vulnerable.

His guess? He’d never get another chance. Never see her unveiled and unprotected again. Not as a friend, and certainly not as a potential lover. Not even if they worked together until retirement.

If he could find a spare time machine, he’d go back ten minutes, extract his head from his ass, and then kick that ass until he shouted his acceptance of her invitation, bloody and exultant. But unless the science department had progressed far beyond the state’s standards of learning, he had no access to a time machine.

He’d have to find another way into her tower, even though his head swam at great heights, and he imagined there would be thorns aplenty along his climb.

It would require time. Patience. Faith in himself.

He had plenty of the first two, less of the latter.

But he was a teacher, goddammit. He’d learn.