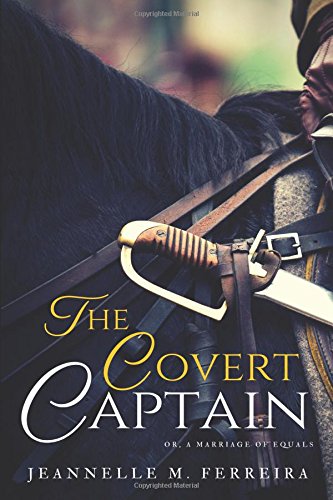 Nathaniel Fleming, veteran of Waterloo, falls in love with his Major's spinster sister, Harriet. But Nathaniel is not what he seems, and before the wedding, the truth will out...

Eleanor Charlotte Fleming, forgotten daughter of a minor baronet, stakes her life on a deception and makes her name—if not her fortune—on the battlefield. Her war at an end, she returns to England as Captain Nathaniel Fleming and wants nothing more than peace, quiet, and the company of horses. Instead, Captain Fleming meets Harriet. Harriet has averted the calamity of matrimony for a decade, cares little for the cut of her gowns, and is really rather clever. Falling in love is not a turn of the cards either of them expected. Harriet accepts Captain Fleming, but will she accept Eleanor? Along the way, there are ballrooms, stillrooms, mollyhouses, society intrigue, and sundering circumstance.

THE COVERT CAPTAIN is a Regency-set romance between Captain Fleming, a veteran of the Napoleonic Wars, and Lady Harriet Gresham, the sister of Fleming’s superior officer. They are thrown together after Fleming joins her superior officer at his house. And yes, the big secret about Captain Nathaniel Fleming is that she was born Eleanor Fleming, taking over her dead brother’s identity to escape her home. This is not a spoiler.

To be blunt, I am not a fan of this book. And listen, Goodreads has a rating of 3.9 for this book, so I’m clearly in the minority in not loving this book. But while I enjoyed some aspects of the book, I spent much of my reading indifferent to enraged.

However, I will say that I did generally like the characters and even the developing romance, but it never connected with me because of the writing style, the headhopping perspectives, my mild confusion, and then my anger when one word was used towards the end.

First, it is a Regency romance between two women, which I have been wanting to read more of. Because the book employs a tremendous amount of headhopping within the early scenes, it is not exactly clear if Fleming identifies as a woman or is possibly nonbinary or genderfluid. I know it will be argued that I’m applying a modern perspective on gender and sexuality, but the book’s lack of clarity and consistency with pronoun usage and perspective speaks for itself:

“A moment’s fumbling, lips against teeth, chill noses all out of place, and Captain Fleming’s fingers went loose in her hair. Harriet slid her own hand into his queued curls, rested her cheek against his and would not let him shrug away. With the second kiss he recalled the art, how two people fit and breathed together…”

Changing between perspectives is often not signaled, making it impossible to know who we are following. Further, the book does not maintain either an omniscient point-of view or a deep third person POV that’s typical in historical romance. It flits between both, which was beyond jarring.

On the issue of gender, it should be noted that Fleming’s gender is revealed twice. Once, she is making out with Harriet, and Harriet notices the lack of a penis and freaks out. How this scene affects Fleming is never dealt with, nor is how Harriet works her way back to realizing she loves the person no matter what. And later, Fleming’s gender is revealed without her consent, which results in someone else’s freakout as well as a threat to her safety. I’ve gone back and forth on whether this constitutes transphobia because the text never really commits either way, but in lieu of evidence to the contrary, there are hints of transphobia.

Further, I’d take the bigger step that there are trans-erasure issues too. This brings us back to the modern perspectives applied to historical narratives argument. And in 2018, authors owe the present more care than the past when it comes to marginalized identities. Does Fleming identify as a woman, a transman, nonbinary, genderfluid, genderqueer? I don’t know. What I do know is that Fleming lives as a man, dresses as a man throughout most of the book (one flashback aside), and is called Captain, Fleming, or Nathaniel by everyone but Harriet. Because the text doesn’t engage with that, I can’t ignore the possibility that there are trans-erasure issues.

Then, there was the purposeful use of “hermaphrodite” by Harriet’s brother in conversation with Fleming. I don’t even know what to say about that except that it served no purpose other than the author wanted to use it. Yes, it is of the time, and I will groan about its use in books from the past; however, in 2018, I expect an author to know better, I expect an author to consider potential intersex readers who have to face a harmful word. Just because a word is accurate to the time, doesn’t mean you have free rein to use it in a book published in 2018. And it served no purpose. It was there to be there. It was there for “historical accuracy” ignoring the harm its one usage could do.

And the writing is purposely antiquated. I would even say inaccurately so, but I’m not an authority on that; however, it doesn’t mimic what I know of the speech style of 1817-1820. The style attempts for something older, which made reading difficult. For instance, “chronometer” is used more than once when “clock” or “timepiece” would be appropriate and make me complain less. And there’s:

“‘I have never known her, dear lady, pray put those daggers away; she has to now conducted herself most tiresome chaste.’”

The use of language is a fine line writers of historical romance walk. If it’s too modern, complaints roll in about your use of “OK;” but if it’s too of the past, I end up saying overly antiquated. I want books to be immersive experiences, but they can’t be immersive when I am looking up phrases and terms multiple times per chapter to understand what was meant. They aren’t immersive if I don’t know whose POV I have.

HOWEVER, I did like Captain Fleming and Harriet, but I’m upset that I barely knew what they were thinking and feeling. And that’s my biggest issue with the romance: we barely scraped the surface with the characters. Just as we begin to really learn about how they feel and what they want, the scenes end. The book walks right up to the line where I begin to care and then cuts to some other scene. There is no time to be engrossed with the feelings, revelations, and even the romance. The book seemingly does not engage with how these two people are figuring out who they are to each other and who they want to be.

I wanted to love THE COVERT CAPTAIN, and I think people who are really craving f/f historical romance might give it a try. It might work for you where it didn’t for me.