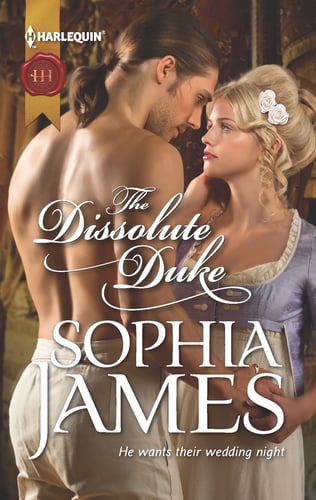 The rumor is up and the banns are read: The Dissolute Duke has finally wed!

With a name synonymous with sin and debauchery so shocking it is spoken of only in whispers, Taylen Ellesmere, Duke of Alderworth, is more surprised than anyone when he finds himself forced to marry! Before the ink is dry on the register, he turns his back on this sham of a marriage and leaves.

Three years later, having barely survived the scandal, Lady Lucinda has placed one delicately shod foot back in the hallowed halls of the ton when her husband returns. He has an offer she can't refuse. And in exchange? Their wedding night!

This was part of my endeavor to try a lot of different historical romances by folks I’ve never read before, and The Dissolute Duke was a miss.

Lucinda and Taylen meet at his house party when she hides in his room. He briefly begins to seduce her, she says no, and he decides to take her home to her family in London. En route, they are in an accident, she’s unconscious for days and remembers vague details. But she is ruined and she (and all of society) believes that he slept with her when she was a bit too drunk at the party. So, Taylen is painted as a seducer at best, a rapist at worst. And Lucinda and Taylen are forced to marry. Her brothers give him money and force him to leave the country.

Three years go by, Taylen returns making a fortune in gold mining in Georgia and proposes a bargain with Lucinda that he’ll give her money and freedom if she gives him an heir. And let me just say, there’s still more plot, which really means there’s too much plot for something so short.

One of my least favorite tropes is a forced marriage, but I’m trying new things, some just don’t work. My biggest issue with The Dissolute Duke is that Lucinda believes they had sex, but she can’t remember things from just before the accident clearly, so there is an element of Taylen being falsely accused of rape. It’s never expressly said, but it is implied. The implication changes over the course of the book as she thinks about how only Taylen has stirred desire in her (except she doesn’t really remember that, so how does she know this?). Honestly, I hated the secondary characters (who all have their own books) because Lucinda’s brothers force her to marry a man she thinks might have raped her and then their wives (once Taylen returns) are all very “but you look so lovely together” and “he’s probably not so bad.”

But listen, I did finish the audiobook, it was just very not for me. There’s so little depth to the characters that all I know about Taylen is that he was abused as a child and has a bad reputation. Really, I just kept going because I needed to be able to answer a content warning question.