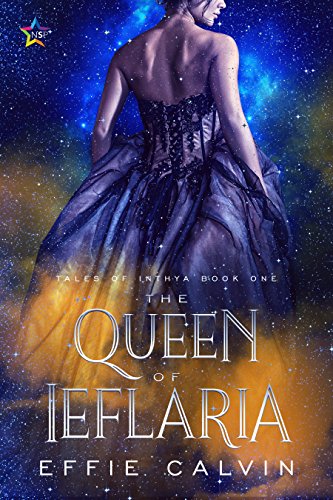 Princess Esofi of Rhodia and Crown Prince Albion of Ieflaria have been betrothed since they were children but have never met. At age seventeen, Esofi’s journey to Ieflaria is not for the wedding she always expected but instead to offer condolences on the death of her would-be husband.

But Ieflaria is desperately in need of help from Rhodia for their dragon problem, so Esofi is offered a new betrothal to Prince Albion’s younger sister, the new Crown Princess Adale. But Adale has no plans of taking the throne, leaving Esofi with more to battle than fire-breathing beasts.

Review: The Queen of Ieflaria, by Effie Calvin

At long last, I have read The Queen of Ieflaria! I'll admit, backlist (already released, out for a while) books being on audio increases my chance of reading them by about 90%, and that's definitely the case here. I bought it from NineStar ages ago, but it's languished on my Kindle ever since. The first two in the series, The Queen of Ieflaria and Daughter of the Sun are both out on audio, the third is currently in eBook and I have hopes of audio.

This is definitely a fantasy romance, with complicated world-building including:

- Everyone is queer and, though they have a default gender setting, many can change form in order to produce a child. Nonbinary characters, pansexual characters, everything is normal.

- Dragons are attacking! The two kingdoms are uniting via marriage so that they can join forces to fend off the dragons.

- Magic and religion are intertwined and complicated. Magic has left Ieflaria for reasons revealed in the book, but not Rhodia, where Esofi comes from.

Though the dragons pose a threat and a couple of attacks are integral to the story, most of the conflict is internal. Esofi has traveled from Rhodia to Ieflaria to marry Prince Albion, but he has just died and his sister, Adale has assumed the role of Crown Princess, much to her distaste. Adale is accustomed to playing the role of ne'er-do-well wastrel - drinking and carousing with her friends at all hours, hunting for days, and generally not espousing any interest whatsoever in the ruling of the kingdom.

When Esofi shows up, Adale is determined to abdicate and allow one of her terrible twin cousins to assume her role. She doesn't believe in herself and she knows that since she's nothing like Albion or Esofi, she'll be a terrible Queen. Plus? She doesn't know if she wants children. As the two get to know each other and fight off the machinations of those cousins, Esofi helps Adale realize that while she is different from Albion, she can be her own kind of ruler and she and Esofi can build a relationship that is just as solid as anything Albion and Esofi had.

Grief and fear are underlying themes throughout the book, with both women struggling to work around the spectre of Albion's promised future. They are very different and grieve in different ways, but it's lovely to watch as they sort out their relationship with each other and with their roles as future queens. This is something of a slow-burn romance, with kisses-only.

Plus, there are dragons.