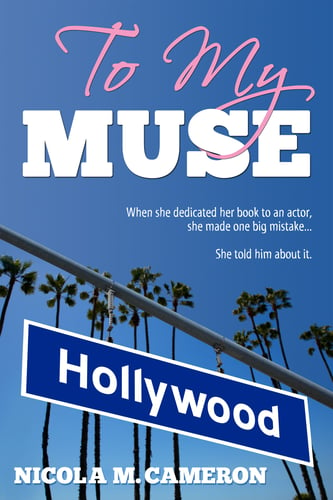 Ever do something really, really dumb?

When too much tequila and an enabling BFF put Lily Nayar's romance novel FEAST OF LOVERS into the hands of its inspiration, sexy British actor Tom Morrison, Lily is horrified. Now she's determined to get her book back, even if that means breaking into Tom's hotel room to do it.

With the help of a strategic lie and an Oscar-winning knight, Lily's screwball plan catapults her into the middle of her very own Cinderella story, Hollywood style. But will a vengeful actress ruin Lily's shot at a real life HEA with Tom?

Review: To My Muse, by Nicola M. Cameron

To My Muse is inspired by Cameron’s real-life brush with celebrity. Lily is a tech writer, but her real passion is romance writing. She has a successful self-publishing career that’s rarely discussed by her somewhat conservative Indian family, and her new fantasy series is taking off. The latest book’s main character is inspired by actor Tom Morrison, who is on a Western sci-fi TV show that sounds a lot like Westworld. One night Lily gets drunk, sends a copy of Feast of Lovers to Tom, and what happens next is on the level with a 90s rom-com movie. Lily breaks into Tom’s hotel room to try and get back the book and to dissuade a coworker from hitting on him, and Tom makes Lily his fake girlfriend. Tom is already impressed with Lily’s writing, having devoured her latest romance novel, and offers Lily a job adapting a biography into a screenplay. As they work, travel, and get to know each other, the whole fake relationship thing starts feeling more real by the second.

Now, I, of course, would like this to happen to me. I think everyone has this fantasy. In Cameron’s real-life version, she sent her book to a celebrity and got nervous that she sent her professional smut to an actor that inspired the protagonist. But the fake girlfriend premise takes it to a level of unbelievability. Honestly, I’m ok with that. We all need a little fantasy in our lives now and then, and imagining a hot British actor swooning for a writer is a dream I’m ok indulging in. To My Muse reads like a fluffy rom-com movie, best enjoyed with your favorite drink and plushest blanket. It embodies that genre with its fantastic set of secondary characters, classic mix-ups, and somewhat preposterous plot. In true 90s rom-com fashion, there is even a woman who is jealous of Lily because she wants to get with Tom (more on that later). But Cameron brings the heat with Lily and Tom. Probably because of my own fantasies, I was rooting for Lily to make a move on Tom. Their chemistry is palpable, and although Tom can probably have his pick of romantic partners, he is immediately drawn to Lily.

What stands out is that though Lily is Indian, Tom never fetishizes her “exotic” looks. My new pet peeve in romance novels, whether they are contemporary or historical, is when male protagonists call women of color “exotic” because they aren’t Anglo blondes. Having a different skin tone DOES NOT make you exotic. Maybe being a shimmery fairy or a ghostly pale vampire would be exotic but being a person in America who happens to have origins from another country is not. The “villains” of this story (though to say villains sounds like they are cackling in the background, which they are not) are the ones that are body shaming Lily or calling her “exotic.” Tom is never the man to bring up these thoughts and treats Lily like a *gasp* beautiful woman! She is never othered by her friends or paramour because of the way she looks and making the bad guys of the story do that sends an important message to readers.

The one thing I didn’t care for was the aforementioned jealous woman. Claudine is an actor on Tom’s show and wants to get with him badly. She’s the catalyst for Tom making Lily his fake girlfriend. Claudine is the spurned older woman who wants to jump the hero’s bones and does everything she can to stop the heroine from being with him. It’s a trope that comes up every now and again, and I’m kind of over it. I think maybe if this were a different year I wouldn’t have minded this trope as much, but today I’m tired of seeing women competing over such a petty thing as a man’s body. Claudine has zero feelings for Tom - it’s all sexual. I would’ve liked to see Claudine as less the spurned woman and more the person who is open with her sexuality and when rejected moves on. She’s there as the catalyst for the start of Tom and Lily’s relationship, but she doesn’t need to be the continued antagonist. In a story about a woman of color trying to make it in writing and Hollywood, there are plenty of bad guy opportunities. Having a bad gal who resorts to blackmail and body shaming doesn’t need to happen.

Regardless, To My Muse is a fun summer read - it strikes a delicate balance between fluffy vacation read and thought-provoking (but not triggering) piece on being a woman in Hollywood. Tom is adorable, supportive, and always an advocate for Lily’s career. And Lily is such a breath of fresh air. I think every romance I’ve read about an Indian character has revolved around her trying to shirk traditional and cultural norms to be “who she wants to be.” In To My Muse, Lily’s family always supports her, and the tension comes from wanting the very best for her which doesn’t always vibe with her professional aspirations. Even though there are some things I didn’t personally enjoy, I would still recommend this to people because of its fantastic characters and super fun plot!