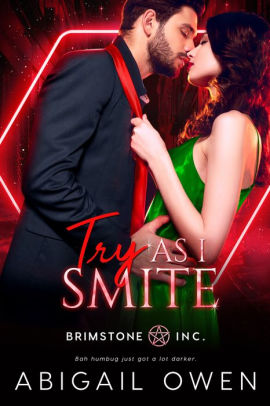 Review: Try As I Smite, by Abigail Owen

The fourth (or fifth, if you count a short story) novella-length book in Owen's Brimstone, Inc. series follows, at long last, the woman matchmaking everyone in the prior books, Delilah. There are some things I can't tell you about her because they're spoilers, but let's just say that her arc is The Most.

This is an enemies-to-lovers romance between Delilah and Alasdair, the head of the witches (The Coven Syndicate). They've been at odds this whole time, especially when Delilah helped a fugitive witch go undercover as a nanny in a witchhunter's house in the last book, Bait 'N Witch. In some ways, Delilah reminds me of the meddling head Valkyrie, Nix, from the Immortals After Dark series. She helps people in unexpected ways, putting them in situations they'd never choose for themselves. And then they find love, save the world, etc. It's fun to see her get her comeuppance and HEA all at once.

However, this is also a Christmas story. I didn't realize that before picking it up and was pleasantly surprised when I got to the bits that felt like A Christmas Carol. (Read the blurb, Suzanne!) Delilah is magically prevented from helping Alasdair with a demon problem, so she sends him to her mother... who sends them traveling through their memories together. Rather traumatic memories, a few of which are confusing to the protagonists and sometimes to the reader. For example, there's a scene in which they're making out against a wall and then everything goes dark and they're suddenly in a different memory. Awkward.

The plotting, as over-the-top as it may be, is tighter in Try As I Smite than in the earlier stories. It's not perfect, but it doesn't sag in the middle like the second and third. Overall, another quick, sexy paranormal romance with just a touch of Christmas magic.

I received a copy of this book from the publisher in exchange for an honest review.