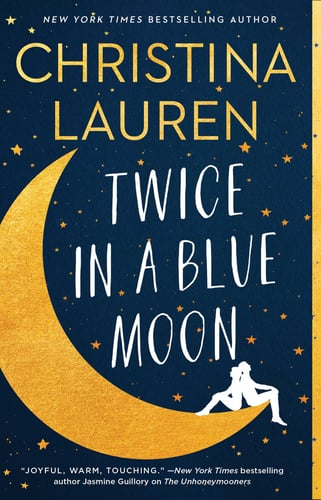 Review: Twice in a Blue Moon, by Christina Lauren

I have a lot of complicated feelings about Twice in a Blue Moon. A couple of them involve spoilers, so I'll stick that at the end. This is a second-chance romance that begins when Sam and Tate meet in London while on vacations with their grandparents. She's with her cafe-owning, over-protective grandmother, and he's with his step-grandfather who turns out to be terminally ill. This last bit is revealed early in the book, so don't be mad at me. Anyway, they're staying at the same hotel and end up eating breakfast together every day. The vacation is two weeks long and Sam and Tate, ages 21 and 18, fall into a whirlwind romance. Vacation is cut short, however, when Sam presumably tells the press that Tate is the long-hidden daughter of a mega-famous movie star, a secret she, her mother and her grandmother have worked to hide for over a decade. Then she doesn't see him again and doesn't have any way of contacting him. Fourteen years later, the two are reunited when she's cast as the lead in a movie adaptation of his novel, Milkweed.

The romance is much stronger in the Before, when the two are learning about each other and falling  in love. After they meet again, there's a lot about the filming, the movie itself, and some angry sex/reconciliation sex. I'm not sure I believed their HEA completely (see spoiler below), but it was still full of the kind of swoony lines I'm accustomed to reading in a Christina Lauren book.

Now on to the complications.

When we're introduced to Sam, we hear about how huge he is--tall, wide, imposing but trying not to be. Then we meet his grandfather, Luther, who is described as Black with salt and pepper hair. It's not for another chapter that we learn that Sam is white and Luther is his step-grandfather. This pattern continues throughout the book. Any PoC are either on page or mentioned for a long time before we hear anything about their ethnicity, or they're immediately marked. None of the White characters are assigned a race except for Sam, when he says something like "Luther is my step-grandfather, but you probably guessed that since I'm a White guy and Luther is Black." This pattern of not-quite-there continues throughout the book. This is really common in books written by White authors so I'm not trying to call out CLo in particular, but it serves to reinforced the White Default and other all PoC. It's not great.

If this was my only concern, my feelings would be less complicated. However, the plot hinges upon the romance between Sam's White grandmother and Luther. They got together in a small town in Vermont in the late 60's, meaning that they experienced a lot of racism. In fact, someone in town burns down their barn in an attempt to run them out of town. While I don't think it's CLo's place to speak about racism from the perspective of their Black characters, it felt really weird that there was this huge spectre of violent racism hanging over Luther's entire life and the book then film. The actor playing Luther in the film is Black and excited to play this emotional, award-nomination-worthy role, but there's only one scene in which he casually mentions how moving it is and that racism still exists. Again, not their place to write Black pain, but I also don't think that this was their story to tell. It felt sanitized and the emotional heft of the book is really more about Sam's betrayal and one later by Tate's (terrible) father who is cast in a supporting role in the film. It's just not quite there for a White author duo to write about two White characters falling in love set against the backdrop of violent racism.

I'll admit, I had a hard time separating myself from much of this narrative since I grew up on a dairy farm in Vermont and one of our barns burned down shortly before I was born. Then another one when I was 12. It's traumatic and neither of those was caused by arson. It's terrifying and my mother still has nightmares. I also lived in Vermont when we were the first state to pass Civil Union legislation for same-sex couples. Someone nearby painted the entire side of their road-facing barn with "Take Back Vermont," a widely used slogan for the homophobic movement that wanted to repeal that law. Prejudice thrives in the hills of Vermont. Why else would we have a population that's 98% White? We never made interracial marriage illegal in the state... because it wasn't an issue. People like to point to us as the exception because "we weren't as racist as all those Other States!" It's simply untrue.

Anyway, it's a second-chance love story and they have an HEA. I'm sticking the spoiler down below the content warnings, so if you want it...

Special thanks to Kini from Smexy Books who talked to me a bunch about the book as we both sorted through our feelings about it.

Spoiler: Sam actually DID sell the story to the press! He finds out that Luther took him to London to say goodbye, because he knows they can't afford treatment for his illness. So Sam sells the story without giving Tate even a warning and uses the money to pay for Luther's treatment. Luther ends up living another 10 years instead of a few months. Could they not have found a different way to handle this? Because OMG I hated Sam for doing it. He claims to have loved her every day, but he gets married and divorced in the intervening years, so that's not great for his claim or ex-wife. So he claims to have been in love with her but also says he'd do it again when she asks. Yes, Tate ended up being a successful actress, but she had press hounding her for well... forever, and she had no choice.

I think if he had told Tate what he was planning and why, she would have at least been able to manage it better. I was SO mad at him and I never forgave him, even if Tate immediately rolled over and did.

How do we know he won't betray her again?