I’m not sure where 2019 has gone, but here we are - already in August.  RWA has come and gone, the kids are either already back in school or will be very soon, and large swaths of the US are looking forward to Pumpkin Spice Everything. While, on one hand, I felt energized at RWA to come home and “read all the things,” the reality has been “um, not so much.”  Distracted and cranky seems to be the mood of the moment. So to snap myself out of it, why not browse for intriguing sounding unusual historicals? Here are the August releases that caught my eye. 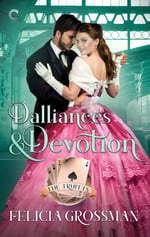 A change in course can be refreshing…when it’s done together.

After two disastrous marriages, beauty columnist Amalia Truitt’s life is finally her own—well, it will be if she can get herself back to Delaware and demand access to her share of the Truitt family fortune. After all, the charity she’s organized for women who can’t afford their own divorces won’t fund itself.

However, not everyone wants her to reach her destination. When her family learns she’s been receiving anonymous death threats, a solo journey is out of the question.

Enter David Zisskind, the ragtag-peddler-turned-soldier whose heart Amalia broke years ago. He’s a Pinkerton now, and the promotion he craves depends on protecting his long-lost love on the unexpectedly treacherous journey across Pennsylvania.

That their physical connection has endured the test of time (and then some) is problematic, to say the least.

In very close quarters, with danger lurking around every curve, with each kiss and illicit touch, the wrongs of the past are righted. But David can’t weather another rejection, especially with his career in jeopardy. And Amalia can’t possibly take a lover, never mind another husband…not with so much depending on her repaired reputation. Not when she’s hurt David—her David—so badly before.

Wendy general rule of thumb: it’s a historical romance published by Carina - one-click it on principle (seriously, they publish so little of it - I’m hoping the ol’ “vote with your dollars” might start to actually work).  This is the second book in Grossman’s Truitt series and honestly what isn’t to love about this back cover blurb? A twice divorced heroine, a Pinkerton agent hero with a tattered past, and a reunion romance. Wendy catnip y’all. 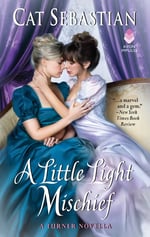 Lady’s maid Molly Wilkins is done with thieving—and cheating and stabbing and all the rest of it. She’s determined to keep her hands to herself, so she really shouldn’t be tempted to seduce her employer’s prim and proper companion, Alice. But how can she resist when Alice can’t seem to keep her eyes off Molly?

Finds her own heart

For the first time in her life, Alice Stapleton has absolutely nothing to do. The only thing that seems to occupy her thoughts is a lady’s maid with a sharp tongue and a beautiful mouth. Her determination to know Molly’s secrets has her behaving in ways she never imagined as she begins to fall for the impertinent woman.

When an unwelcome specter from Alice’s past shows up unexpectedly at a house party, Molly volunteers to help the only way she knows how: with a little bit of mischief.

It’s like romance authors got together and decided to publish all the Wendy Catnip in the month of August.  This novella, part of Sebastian’s Turner series, features a thief turned Lady’s maid and an upright Lady’s companion.  Library Journal gave this a starred review and called it a “fun, sexy romp.” If I wasn’t sold already, that sealed it. 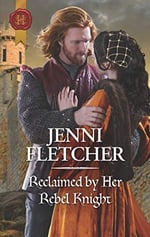 Reclaimed by Her Rebel Knight, by Jenni Fletcher

Married to a perfect stranger…

Reunited with her warrior husband

When Constance inherited her father’s lands, she had no choice but to marry cold-hearted Matthew Wintour. He left her for the battlefield, without even a wedding night. Five years later, Matthew has returned a valiant knight! But Constance is no longer a frightened girl. And, this time, she must reach out to discover the honorable man behind the armor and what pleasures await them in the marriage bed…

Ah, the hero who takes off before the wedding night - seriously, will these guys never learn?  And it was an arranged marriage no less. The back cover blurb entices me with the promise of a heroine with gumption and I’m a sucker for marriage of convenience tropes of all stripes.