A rip-roarin', sexy new sci-fi romance series with the perfect balance of humor, heat, and heart. Now that Texas has seceded and the world is spiraling into chaos, good guys come in unlikely packages and love grows in the most inconvenient places...

Rogue scientist * technologically enhanced * deliciously attractive
Heron Farad should be dead. But technology has made him the man he is today. Now he heads a crew of uniquely skilled outsiders who fight to salvage what's left of humanity: art, artifacts, books, ideas -- sometimes even people. People like Mari Vallejo.

Gun for hire * Texan rebel * always hits her mark
Mari has been lusting after her mysterious handler for months. But when a by-the-book hit goes horribly sideways, she and Heron land on the universal most wanted list. Someone set them up. Desperate and on the run, they must trust each other to survive, while hiding devastating secrets. As their explosive chemistry heats up, it's the perfect storm...

The Tether Series (also referred to as the Wanted & Wired Series), by Vivien Jackson, is my first foray into sci-fi romance, and I am totally sold on it. So far, there are two books out -  Wanted & Wired and Perfect Gravity. These books tell the stories of a diverse cast of characters fighting to keep their post-apocalyptic homes and the ones they love safe. In the near future, the North American government has coalesced around a new capital in Denver. Man-made weather disasters have destroyed major cities in the rogue state of Texas.

The series kicks off when Mari Vallejo, the heroine of Wanted & Wired, is contracted to destroy the mech-clone of Daniel Neko. The first book follows Mari (a mercenary) and her partner in crime (and sexy-times) Heron Farad, as they flee after discovering they’d completed their hit on the real Daniel Neko, not the fake one. The second book, Perfect Gravity, follows Daniel’s widow and sitting Senator, Angela Neko, as she attempts to reunite with Heron’s crewmate, Kellen Hockley (genius, former veterinarian, and shipboard medic). In Perfect Gravity, all four work (and various side characters) work to avert a war of epic proportions.

As a white guy, I’m curious to know how well these characters were or weren’t handled - the only indicators are their names, and very occasionally a reference to a physical characteristic. It’s not so far into the future that cultural differences feel like they’d have been erased, but I'm not the right person to speak to that. 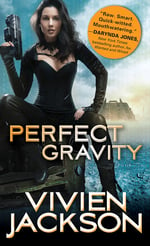 The setting truly is a kind of science fiction I was hoping for (though I never read much of it growing up), with robots, space travel, lightning-fast computers, fancy guns, underwater technology, and the like. It is fast-paced like so many great science-fiction TV shows, and, like the best, the problems aren’t best solved through violence (even if it is Mari Vallejo’s preferred solution).

There are even, yes, robot (cyborg) sexy times in the first book, which I must admit, I’d been crossing my fingers for (as would anyone who’s read Chester 5000 XYV). Heron has heightened senses, which makes for a particularly delightful scene in a car. Did I mention that, when he is hooked into a vehicle, he can feel everything the car would feel? Mari certainly has fun with one distracted driver...

Author Vivien Jackson has written a wonderful cast of characters, not just the heroes and heroines. Mari and Angela (the heroines of books 1 and 2, respectively) are extremely different people, and not just in their upbringing and accents. They approach problems and relationships in completely different ways. Their partners, Heron and Kellen, are just as different, and so the second relationship feels completely novel and fresh compared to the first. Heron and Kellen, as crewmates, do share some characteristics (both are caring, determined men), which makes sense, but they still have different fears and hobbies.

Overall, the storyline kept me completely hooked from the first pages of Wanted & Wired, wondering how Mari and Heron were going to survive the chaos. Perfect Gravity was slower by comparison, but I’d been hooked into so many pieces of the mystery - trying to piece together what had happened and who was really in charge of UNAN and Texas - that I had to keep reading to find out how the plot resolved. Angela, in particular, goes through some of the most fantastic character growth in the series, and it was a joy to see how someone can change, so much for the better.


I’d recommend this book to anyone who has read more traditional sci-fi, but also to anyone who’s read a lot of paranormal and is uncomfortable with the common consent issues to that particular subgenre.

Two content warnings: Perfect Gravity refers to emotional abuse from a past relationship and to a miscarriage.

More about Wanted & Wired and Perfect Gravity plus links to buy a copy!