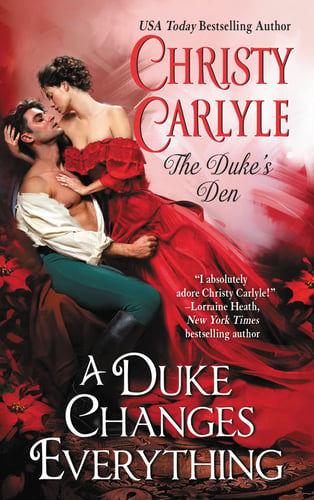 Review: A Duke Changes Everything, by Christy Carlyle

This book has made me a liar. It turns out that I’m not as tired of gaming hells as I thought. Nor am I that tired of aristocrats who can’t believe in love because of past abuse. Christy Carlyle made me a liar. And I actually really enjoyed A Duke Changes Everything, so I’m cool with being a liar today.

In the book, you have a man (Nick) who worked to create a gaming hell from nothing, except he is actually the second son of a duke, but instead of being raised in extreme privilege, he was beaten by his father and fled with his mother with barely anything as a child. And then you have a woman (Mina) who was the steward’s daughter and has been acting as steward for the duke since her father’s death. Nick unwillingly becomes the Duke of Tremayne after his brother dies. He decides to return to the place where he was tormented as a child so that he can sell as much as possible and then rent it. However, he meets his steward and she works to change his mind.

Now, here are the things I am willing to say that usually bother me, but I did not mind at all in this book:

How did I get over my gaming hell fatigue? The book almost immediately moves to the country, which seems like a lovely covert way to appease a weirdo like me.

The history of abuse? That will never be my favorite, but it really was less “I could never love a person” and more “I could never want to be here,” which seems understandable. Nick does go through some “could she love the monster that I am?” and sue me for being fickle, but I adored him and that was all that mattered to me.

The lack of the employee-employer power dynamic discussion was interesting, but it was almost as if both understood that it existed and both knew that they would be fine whether or not their pants feelings were indulged in. The only moment that Mina was worried that she would lose her job was when Nick discovers that his steward is Thomasina not Thomas. She is so effective at her job that respect flows between them. And even after they’ve kissed and later slept together, there is no threat to her role. If she wants to be steward, Mina will be steward. There is also a touch of flirting over accounting; and this is a specific thing I never thought I’d be super into, but I am.

I’ve talked a lot about Nick, who is great, but Mina is really a star. Mina is confident and strong. She doesn’t bow down for anyone. She remains honest with Nick to the end. She’s good at her job and knows it. And everyone who works with her (sort of for her) respects her. The only people who give her the “a woman shouldn’t be a steward” line are the old men in the village. And she’s kind and understanding. Kind characters are my catnip if you didn’t know (and they aren’t as common as you’d think).

A Duke Changes Everything is just a charming book with protagonists I adored, and I can’t wait for the sequels which will definitely be about Nick’s friends at the gaming hell. I am as surprised as anyone about that, but this is all because Carlyle wrote something completely lovely. Also, the audiobook had an excellent narrator in Karen Cass.

Content warnings: past physical abuse that is revisited, abusive father, dead parents, animal that has been abused

Audiobook borrowed from my library through Overdrive/Libby.