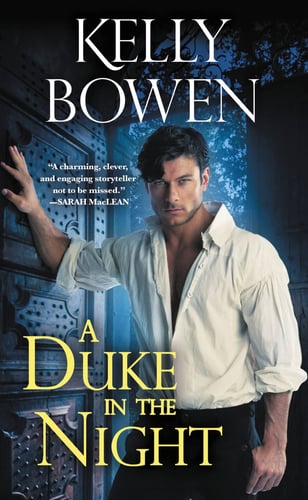 Review: A Duke in the Night, by Kelly Bowen

Kelly Bowen starts off a new series with A DUKE IN THE NIGHT, an historical romance with strong feminist themes. While this book is not as strong as her Season for Scandal series, it's immensely satisfying to see a strong, wealthy, white man taking cues from a woman.

August Faulkner is set up as a sort of self-made duke, which seemed a bit like shoe-horning in a title for the sake of it. His father went to debtor's prison when he and his sister were very young, so he lived on the streets, working and stealing his way to prosperity. When he inherits his title, he continues building an empire, taking apart businesses and putting them back together in more profitable ways. His is very much a modern rags-to-riches story set two hundred years ago.

However, the book blurb might be misleading. I didn't get alpha hero vibes from August. He is a bossy, domineering older brother for about 15% of the book, but then takes a backseat and listens to the female main characters in the novel. Everyone is remarkably even-tempered and reasonable, which is refreshing but not particularly suspenseful. Even the big misunderstanding (he withheld some information) is quickly resolved. Clara's reaction is essentially "I know why he did it, I'm still upset, but it makes sense."

This is a novel that feels very much of the moment. You can almost feel the author processing the events of the last 18 months and raising her voice in protest. At least half of the book consists of Clara, a capable, intelligent, and big-hearted woman, teaching young women to trust themselves and teaching August to trust women. From that perspective, there are several scenes where readers will probably nod along and maybe say "that's right, you tell him." I certainly did. August is receptive and willing to understand, which is more than we usually get in the real world (and more than 19th century women would likely get).

In one scene, August barges into a private painting session, ignoring the sign on the door that says "Please Do Not Disturb." Inside, several young women are painting an older nude woman in repose.

"With a woman old enough to be my grandmother?" August demanded.

Clara's eyes suddenly went cool. "I didn't realize there was an age at which one can no longer be considered beautiful. Or desirable."

August felt his mouth snap shut. "That's not what I meant," he said after a moment.

"Then what did you mean?"

"I meant that... that it is not... seemly." God, he hated the way he sounded right now. Like an old, self-important ass. When he got his wits together, he would blame it on the shock.

"Not seemly." She crossed her arms over her chest and regarded him. "Which part?"

"Which part isn't seemly? The part where Lady Theodosia is comfortable and confident in her own skin? Or the part where we ask ten young women who have been and will continue to be judged on their looks to consider that beauty comes in many different forms?"

August opened his mouth and closed it again.

As I said, there's an immense satisfaction in reading Clara's articulate response to casual misogyny. She's able to say all of the things that we wish we had said in the heat of the moment when a man has made a dismissive remark without examining the reasoning behind it.

And yet, as we continue to buy and read this new wave of feminist historical romance, I can't help but notice all of the people we leave behind in our imaginings. Clara wouldn't have been able to open a school and her students wouldn't be able to attend it if they weren't already immensely privileged. August is named as one of the largest importers of tobacco in England, which is all well and good until you have a moment to think about where that tobacco comes from and the fact that slavery is still thriving in the United States. That said, no one book is going to cover all of the intersectionalities of gender and race and class. This one clearly knows it's a white feminist romance and does that quite well.