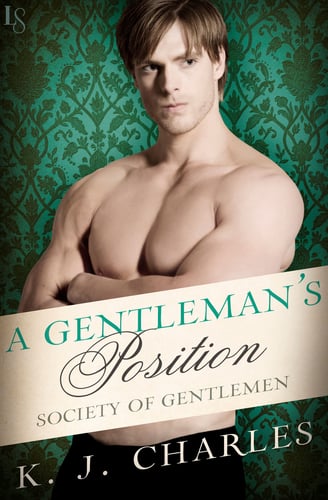 Before we get into Eva's review, you might want to read what we thought of the first two books in this series! We mention both A Fashionable Indulgence (Book 1) and A Seditious Affair (Book 2) in our Pride Month post for The Ripped Bodice's Summer BINGO.

On with the review!

David Cyprian has wanted Lord Richard Vane from the moment he started working for him as a valet. But he always assumed these feelings were one-sided. When Richard slips up and it becomes obvious that this isn’t the case, David decides to act.

I admit I didn’t like what I saw of Richard in the first two Society of Gentlemen books. In those, he seemed standoffish and self-righteous. Additionally, the blurb mostly focusses on the fact that he doesn’t want a relationship because he’s a lord and David is a valet. And I thought that an overwhelming class-consciousness wasn’t a problem I could sympathise with a lot.

Now some of the problems are caused by Richard’s overwhelming class-consciousness but it is portrayed in a way that makes me understand him. Not agree with him but becomes obvious that his issues are more complex than ‘working class people aren’t worthy’. Besides, that’s not the main problem anyway. What Richard worries about is that as David’s employer he would always have power over him and so David would feel pressured into doing things he didn’t want. And this problem doesn’t disappear with a hasty assurance by David that he would be able to turn Richard away. Both spend a lot of time trying to deal with exactly that problem. It’s very refreshing to have a romance so openly deal with themes of power difference/consent.

Apart from the great romance the book also offers an exciting side-plot: a small mistake means the secrets of the society of gentlemen are at risk of being exposed. To stop this, they need David and one of his cunning plans. And it’s a joy to see that plan put in motion and brought to an extremely satisfying conclusion. Especially, since the plan requires the help of all the gentlemen (and Silas) who we met in the previous books. That also means we get some more interaction between Silas and Richard (as well as some other interaction outside the couples) which I loved.

Note: A Gentleman's Position is the last book in the Society of Gentlemen series and while it's not necessary to read all of them to understand the romance, the side-plot will make much more sense if you read the previous books. Plus it does spoil major events from book one and two (and the prequel novella) so if you want to read them all, read them in order.