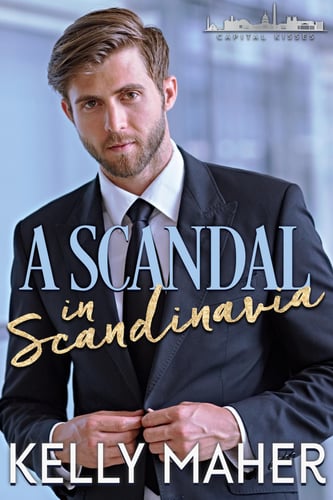 Review: A Scandal in Scandinavia by Kelly Maher

A SCANDAL IN SCANDINAVIA is such a sweet treat to end your January reading. It has everything! Action, a hot romance between an older woman and a slightly younger man, international intrigue, and a nerdy heroine at the center of it all. Though Maher wrote a terrific romance novel to continue her Capital Kisses series, you’ll find the little touches are what make you devour this book.

Missy Karlsen (who briefly appeared in Maher’s last Capital Kisses book, THE BRIDESMAID AND THE HURRICANE) is ready for her new life. She’s booked a solo trip to Scandinavia and to get away from the mess she made back in D.C. Her primary motivation for touring Europe? To visit all of her favorite Nordic Noir settings! Her meet-cute with Rik Scholz is an unconventional one - the first time she lays eyes on him, it’s right after she’s thrown up all over her driver. Not the best first impression. Rik is on the same tour as Missy, but for different reasons. His family owns the tour company, and he’s there as a part of their security division to investigate a possible art smuggler posing as a tour guide. He didn’t expect his investigation to lead him to a beautiful American who just upchucked all over his employee.

Maher tells a very realistic love story in an unrealistic situation. Missy is extremely hesitant about hooking up with Rik from the get-go. A toxic friendship led to her becoming a party girl, hooking up with random D.C. politicos for years before it all crashed down during a party. The event opened her eyes, and her trip to Scandinavia is one of renewal. She doesn’t want to be the old Missy who would jump into bed with any hot man she sees. This hesitancy is so relatable for those of us who have experienced these wake-up calls in our lives. You don’t want to repeat the same mistakes you made in the past, but you do want to live your life. Missy walks this line throughout the novella, and you feel her pain as she deals with her messy past.

Rik and Missy’s relationship starts off slow and heats up towards the middle of the book. Though Rik could have easily been an alpha - he’s the head of a security team after all - Maher writes him as a *gasp* regular guy. Rik is sweet, charming, handsome, and committed to his job. He doesn’t tell Missy about his real intentions for the trip and remains evasive, but will gladly abandon shadowing opportunities to give her a tour of Stockholm. Both characters are incredibly likable, as is Missy’s tour friend Helene. Even the “villain” is exciting! Maher’s experiences in Scandinavia shine through Missy and Rik’s tour of the region. The sense of place will give you serious wanderlust.

If you haven’t read any of the Capital Kisses books, this is a great introduction to the series. It’s short, sweet, and shows off Maher’s strong characters and vivid setting.