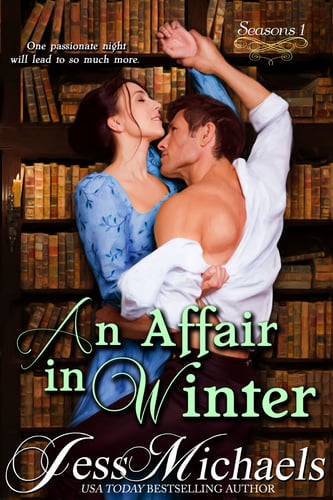 Review: An Affair in Winter, by Jess Michaels

Do you ever read a book that makes you want to just devour an author's entire backlist? And then you discover that they have 1,000 books in said backlist? Welcome to my experience reading An Affair in Winter, by Jess Michaels.

The setup for this one is a little complicated, but it's enemies-to-lovers with the two main characters working to keep their siblings from marrying/get them to the altar. The hero doesn't want his brother to marry another social-climbing terror like his first betrothed, and the heroine wants her sister to achieve the strategic marriage that their grandfather wants. Edited to Add: Rosalinde's parents are not in the picture; her mother is dead and her father has been kept from her.

Rosalinde (now a widow) married for love but not for advantage, something that made her wealthy parents furious. Her sister is supposed to make up for that scandal and seems fine doing so. Grayson's brother holds the title and is therefore responsible for fixing everything their father messed up - part of which means marrying for money. Gray wants his brother to be happy and is convinced that the fiancee is terrible.

What follows is one of the best enemies-to-lovers setups I've read in a historical romance. Neither person is a bad person, there's no "alphahole" behavior. There's tons of bickering and super-hot sex (including in a library thus the cover), but it comes from a good place on both their parts. They're fighting, sure, but it's so carefully built and executed that the main characters and their two siblings all come through looking like good people. The will-they-won't-they and the how-will-they carried me through to the end.

One of the most satisfying historical romances I've read.

Suzanne listened to this audiobook in the Audible Romance Package.