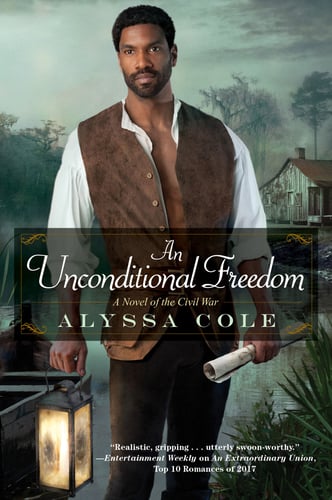 This book came out more than 4 months ago, but I just now managed to read it. Having read the first two in the series, An Extraordinary Union and A Hope Divided, I knew a little of Daniel's story and I wasn't eager to read it. Not because I thought it would be anything less than excellent, but because I knew that Alyssa Cole called this the book that almost broke her.

Daniel was raised a free man in Massachusetts but was sold into slavery by people pretending to be abolitionists. At the end of the first book, Elle and Malcolm free him when he's about to be sold again. Daniel is left a broken shell of himself, convinced he's a coward and not worthy of love. He's suffering from PTSD and is justifiably unwilling to trust anyone. He's also very, very angry. His journey is one of anger and healing, and it's uncomfortable.

Janeta is a Cuban living in luxury with her white plantation-owning family until her father is sent to prison and her home is overrun by Union soldiers. Her enslaved mother, whom her father married, died years ago and she's been both pampered and othered by everyone in her circle. She's coped by becoming what everyone else needs her to be. She's the compliant mistress for a social-climbing a$$hat, not realizing that she's his mistress/not even that until after she joins the Loyal League to spy for him. She internalizes the comments she hears about how enslaved people are happy with their bondage, how they are infantile and can only be taught with abuse, etc. And she listens to her mother, who teaches her that shes "not like those other people" and that the only tool she has in her belt is her feminine wiles. Her journey is one of unlearning, and it's uncomfortable.

The whole book is uncomfortable to read. I will not tell anyone descended from enslaved people that they must read it, but I think that others, particularly white people, should. The ways in which Cole explores unlearning and relearning are especially relevant and thought-provoking. Janeta's characterization as a woman between two sides of the war and two sides of racial stratification is complex and a real authorial feat. There's a lot in here that will make you sit with your feelings.

Both characters also struggle with their gender roles. Tied up in Daniel's self-hatred is his feeling that he is less of a man because he wasn't able to protect the people in his life, especially children, and not even himself. He grew up thinking that he knew how everything could be made better, only to find that he can't. At least, not by himself, and isn't a man supposed to be able to do things on his own? When nightmares cause him to wail and cry in the night, he's so ashamed that he refuses to sleep. (It's also because he doesn't want to draw enemies to them.)

Janeta struggles with her mother's journey from enslaved woman to wife of the plantation owner, and how to reconcile her own seduction strategies with that history. She's been taught that being a social chameleon is her only worth and the only way to stay wanted and loved. She can't be too sexy or too standoffish, too opinionated or too sullen. Not only does she go through a change in worldview, she also learns to think of herself in a new light.

Finally, Cole shows us a side of the war not often seen - the role of foreign powers in the behind-the-scenes machinations of both sides. In the first book, the side plot was mostly about the Clearances in Scotland and the blockade (also the role of white women in upholding slavery), the second book was about the Home Guard and the southerners who didn't want to participate, and this one is about European politics. As always, Cole includes additional reading suggestions and context. You can see the amount of research she's done for each of these books, but it never feels like reading a history text.

In conclusion, this is an intense book that delivers three strong arcs - one for Daniel, one for Janeta, and one for their relationship. I appreciated how slowly their physical relationship progresses, it fits the characters perfectly and their romantic relationship arc follows their building trust in each other. It's absolutely worth the read and I hope people will pick it up.

Suzanne received a digital ARC of this book, but ended up reading a finished copy she purchased.