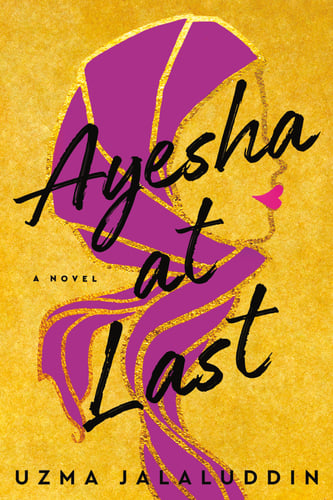 A modern-day Muslim Pride and Prejudice for a new generation of love.

Ayesha Shamsi has a lot going on. Her dreams of being a poet have been set aside for a teaching job so she can pay off her debts to her wealthy uncle. She lives with her boisterous Muslim family and is always being reminded that her flighty younger cousin, Hafsa, is close to rejecting her one hundredth marriage proposal. Though Ayesha is lonely, she doesn't want an arranged marriage. Then she meets Khalid, who is just as smart and handsome as he is conservative and judgmental. She is irritatingly attracted to someone who looks down on her choices and who dresses like he belongs in the seventh century.

When a surprise engagement is announced between Khalid and Hafsa, Ayesha is torn between how she feels about the straightforward Khalid and the unsettling new gossip she hears about his family. Looking into the rumors, she finds she has to deal with not only what she discovers about Khalid, but also the truth she realizes about herself.

I never underestimate the skill it takes to make something new out of something beloved, and Jalaluddin did it (seeming with ease) with Ayesha at Last. Retellings can be a difficult type of book because something as beloved as Pride and Prejudice comes with the expectations of everyone who loved the book (or zombie book), or the miniseries, or the movie (or zombie movie). As a reader, there’s this hope that all the beats will be there and that all of the characters you love or hate will be there too.

It is never precisely the original book, but the pieces you expect remain and yet are different. (It is also super easy to read as not a Pride and Prejudice retelling, so if you aren’t an Austen fan, you might still enjoy this book.)

Ayesha, a substitute teacher and poet, is strong and willful and considered too old by many in the Muslim community of Toronto to remain unmarried (but also to marry). She is surrounded by a loving family and spoiled cousins. She is also the subject of Khalid’s distant admiration, even if she doesn’t know it. And then, you have Khalid who is a very devout Muslim to the point where he faces workplace harassment from his new boss based on how he dresses and practices his faith. He is also completely accepting of everything his overbearing mother dishes out.

And while Khalid wants a marriage arranged by his mother, Ayesha wants nothing that resembles love because she has grown up seeing how bereft her mother is almost two decades after Ayesha’s father’s death. Except neither gets what they think they want as they meet, disagree, and then meet again and become friends. It is in the friendship, with a tiny lie (Ayesha has been tricked into pretending to be her cousin Hafsa), that a love neither wants blooms. These two gentle people are being manipulated by the people in their lives - except for each other - and find a relief in each other.

Honestly, because of the minor deceit over Ayesha’s name, I was so worried for these two that I had to go do some laundry. There is no room in Khalid’s life for lies, but it is a lie that Ayesha never wanted. She tries to tell him the truth, but the words never come out. And there’s a really lovely scene where they make paratha and another where they drink slushies and eat Twinkies, and the coziness and ease is just so natural. And I loved it. Of course, then hell breaks loose.

I do have a couple of concerns about how the Wickham character is managed in the end (DM me for spoilers if you need). And also how Khalid’s racist boss is dealt with in the end. But neither of these aspects really detracted from the book. They 100% deserve what they got, and Khalid’s boss probably deserved worse (the fact that it isn’t worse is probably a reflection on the fact that she’s a white woman and how the world is unfair).

So, yeah, I totally recommend Ayesha at Last and I hope you enjoy these gentle people just trying to survive some family drama too.

Margrethe received a copy of this book from the publisher for review.