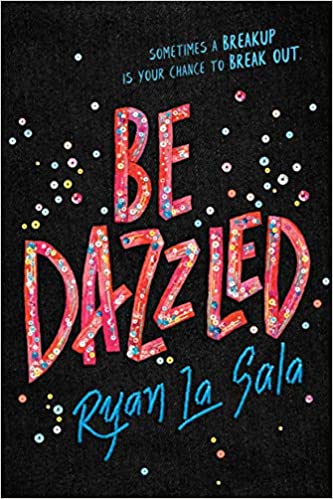 Project Runway goes to Comic Con in an epic queer love story about creativity, passion, and finding the courage to be your most authentic self.

Raffy has a passion for bedazzling. Not just bedazzling, but sewing, stitching, draping, pattern making―for creation. He's always chosen his art over everything―and everyone―else and is determined to make his mark at this year's biggest cosplay competition. If he can wow there, it could lead to sponsorship, then art school, and finally earning real respect for his work. There's only one small problem... Raffy's ex-boyfriend, Luca, is his main competition.

Raffy tried to make it work with Luca. They almost made the perfect team last year after serendipitously meeting in the rhinestone aisle at the local craft store―or at least Raffy thought they did. But Luca's insecurities and Raffy's insistence on crafting perfection caused their relationship to crash and burn. Now, Raffy is after the perfect comeback, one that Luca can't ruin.

But when Raffy is forced to partner with Luca on his most ambitious build yet, he'll have to juggle unresolved feelings for the boy who broke his heart, and his own intense self-doubt, to get everything he's ever wanted: choosing his art, his way.

Be Dazzled is the sparkly gay book I hoped it would be.

Raffy is a seventeen-year-old gay cosplayer with a passion for craft and a dedicated following. His mother is a big name in the art world and looks down on his work to the extent that he has to hide it from her. Raffy's ex-boyfriend Luca is a bisexual soccer player with a homophobic father and a mother who wants Luca to be straight because it's easier. (For her.) When Be Dazzled begins, they've been broken up for a while and the narrative switches back and forth between the beginning of their relationship and the present, when they're against each other in a cosplay competition.

La Sala balances the romantic arc with Raffy and Luca's family arcs, as well as Raffy's growing into himself as a crafter and artist. The relationships between the teens and their parents are definitely strained and since the book is entirely from Raffy's POV we don't know the full of extent of what Luca's struggling with, which worked well as a way of keeping them apart. I was wondering how or if they'd find their way back to each other, how they could possibly work things out with their parents and, honestly, if one of them would get kicked out.

But I'm a queer romance reader and the ending of this book felt like a hug. Nothing's perfect and it's not a sitcom episode where everything's suddenly fixed and happy, but it was hopeful and joyful in a way I really needed in January 2021.

Narration Notes: The audio narrator was a great choice for the story. His narration captured the full range of Raffy's emotional journey and there were points at which I found myself recoiling away from his mother's disdain. My only regret is that I couldn't see the intricate and lovingly described cosplays, but the ebook wouldn't have helped there!

I received a digital copy of this audiobook for review but liked it enough that I purchased a copy of my own.