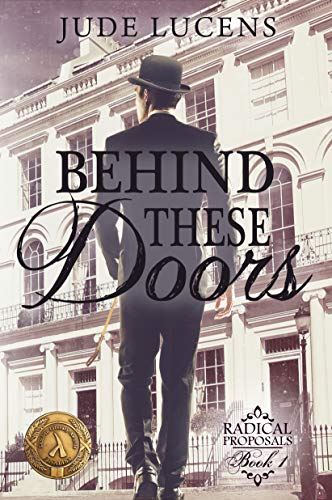 Review: Behind These Doors, by Jude Lucens

Behind These Doors is unlike any other historical romance I've read. Perhaps there are dozens of polyam feminist Edwardian romances out there, but I'm missing out if so.  It would be easy to say that the romantic arc follows Lucien and Aubrey, two men from different classes who begin a relationship in the book, but it's also a bit of a Marriage in Trouble romance, with a strained relationship between an existing triad. It's a complicated book, with lots of moving pieces and complex relationships, but Lucens handles it with nuance, grace, and gorgeous prose.

This book is very queer and deeply emotional. Aubrey and his best friend Rupert went to Eton together (I believe it's this one, sorry if not) and forged their lifelong romantic connect as young teens. When not at school, they also connected with Henrietta, a young woman from an estate bordering Rupert's. As needs must, Rupert and Henrietta married since Lord Hernedale (Rupert's eventual title) was better suited to provide for her than a second son like Aubrey. Their relationship has continued through adulthood, however, with Aubrey taking lovers as he wishes.

One such lover is Lucien, a society reporter for a newspaper. Their relationship begins as something purely physical, with Aubrey afraid of being caught as Lucien leaves in the mornings and Lucien annoyed that he's entangled with a nob, but both of them are unable to resist. They quickly realize they're falling for each other, but their class differences complicate everything. This dynamic reminded me of KJ Charles's A Gentleman's Position, but without the employer/employee aspect. Things get messy when Aubrey decides to tell Lucien about his relationship with Lord and Lady Hernedale and then tell those two that he told Lucien. Lucien's a gossip reporter, after all. Things are further complicated by the fact that Henrietta's brother is a Grade A twat and Rupert's low libido makes him feel inadequate.

It's unfortunately rare to read books with a central m/m romance that include women as much as Behind These Doors. Beyond Henrietta's involvement, Lucien also works with a queer female associate to report on the movement for women's voting rights. Again, Lucens employs a nuanced discussion of class, with commentary on how poor women are out in the streets fighting for voting rights when it's wealthy women who will get to vote because of the tie between property ownership and voting eligibility. That in particular was something I hadn't seen in a suffragette romance.

Lucien has another relationship with a married biracial man, Ben (no cheating), who is featured in the prequel novella, Gutter Roses. I will patiently wait for more books, but this one stands alone well.

I could go on and on about this lovely book, but I recommend you read it for yourself. I cried, reader. My friends can tell you that I sent multiple "this f*cking book" texts as I was absolutely emotionally handled by this story and these complicated characters. Crying from a bit of angst, but mostly because I cry when things are so lovely that I can't properly process.

I do think it runs a bit long and that the beginning scenes are confusing because everyone has two names (titled people) and we're introduced to so many characters at once. That initial scene led me to put down the book once before, but I'm glad I made the effort this time. If you struggle with names, trust that there's plenty of time to catch up after!