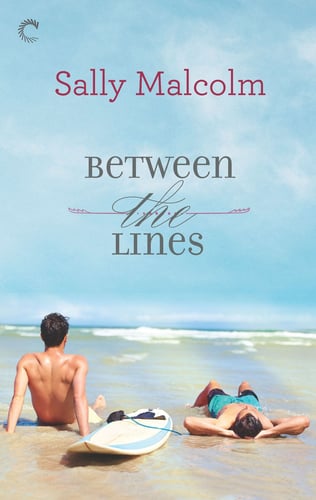 Review: Between the Lines, by Sally Malcolm

In a way, Between the Lines had a lot to live up to for me, which it totally did. I loved the first book in the series, Perfect Day, and because the genuine emotion behind the book was what caught me then, I knew there wasn’t a great risk this time. This is Malcolm’s strong suit: she lingers in the emotions in a genuine and heartfelt way that is also unflinching and I love it.

The plot is fairly simple, Luca returns home to try to convince his mother not to sell the family-run hotel he grew up at, and Theo is there to buy the hotel for his father’s company. However, Luca’s mother would rather the hotel was refurbished instead of destroyed, so she makes this a condition for Theo: stay for two weeks to get to know the hotel before she’ll agree to anything. The thing no one planned on is the instant attraction between Luca and Theo, which results in them agreeing to a no-strings, no-feelings sex arrangement, because that always goes to plan.

Theo has dyspraxia, which has made some aspects of his life harder to manage, especially relationships. An embarrassing affair with a married man in the past is why he demands that Luca be upfront and honest about expectations. This could go the way of Luca taking care of Theo, protecting him from difficult things; instead Luca’s reaction is pretty much “okay, so when do I show you how to bodyboard?” Not that Luca sees this as a challenge, but that he wants to share things with Theo and helps Theo get there. This is obviously when you know that these two kids are fooling themselves if they think they aren’t falling in love.

I wish I had the words to explain why Malcolm is so good. She has written two romances and already I trust her ability to make me feel everything while also taking care of her characters. Nothing is overwrought or manipulative in how Luca and Theo feel. It’s kind and sincere.

For all of my love for Between the Lines, I also want to be honest and say that I have no patience for Luca’s mother and stepfather. (I have some words for Theo’s father too, but I think he might actually be a better parent.) So much focus is placed on how Luca’s mother, Jude, wants Luca to take over the hotel and how he’s disappointing her by not doing it. Except I’m Team Luca on this point. If a parent of mine married a homophobic jerk when I was out as queer, it would be very difficult to forgive and forget. And I’ll end up spiraling on how people love who they love, but I have not forgiven Jude (a fictional character, mind you) for how she chose a dude over her son. Has her husband changed over time? It seems so, just a bit, but that doesn’t change what she did. I am, if anything, spiteful and good at grudges.

But even with parents I’d scowl at if they were real, I loved Between the Lines because it’s about finding a place for yourself and who you want to be while aware of the people who shaped you. And everything between Luca and Theo is tender and true, and that’s what I love most about romance.

Content warnings: references to past homophobia, not the best parents, dyspraxia, sort of a forced homecoming