Cat Sebastian's latest m/m historical romance came out last week and you can read all about it here. After I read It Takes Two to Tumble, I ran off to pre-order her next book... only to discover that the blurb hadn't been posted. The horror, the horror!

Long story short, we asked Cat to spill the proverbial beans and she did. I cannot wait for Cat's nonbinary protagonist. Even better, she shared the cover of her next book with us. It's so pretty, y'all.

First things first, tell us about your research process for the drinking song in It Takes Two to Tumble. Did you have to slog through hundreds of hilarious songs to pick one? Any favorites you’d like to share?

What I learned while researching Olde Timey Filth is that there are quite a few drinking songs about a wife and her sidepiece. I knew this set up was pretty much comedy gold during the Renaissance, but I hadn't realized it lasted so long. Some of the songs are way more sex positive than I might have expected songs about adultery to be, and it's a good reminder that society didn't always think sex was shameful.
What made you decide to write kids into this novel? Is it because you, like Captain Dacre, have an older son and a set of fraternal twins?
I don't terribly enjoy books with kids in them, and never really intended to write any children whatsoever. But I wanted to write a story about trying to parent when depression is telling you that everybody you love is better off without you. I say this with the heaviest of hearts, but the Dacre children's antics are pretty much lifted off my own kids' shenanigans. My oldest is mostly quiet and thoughtful, but the twins... let's just say they've logged serious hours hiding in trees and running around barefoot to catch loose dogs.
What’s next for the Sedgwicks? And you have some Imposters coming up, too?
I'm just finishing up the next Sedgwick book, A Gentleman Never Keeps Score, and it's about the vicar's brother, Hartley. He's difficult and messy and I love him. His love interest is a former boxer turned pub owner. They join forces to steal an incriminating naked painting. And after that there's another Sedgwick brother whose story is still in the horrifying larval stage, so we'll avert our eyes for the moment.
So, the Sedgwick books are all m/m, but the other series I have starting soon is Regency Impostors, which won't be m/m. Unmasked by the Marquess is the first, and it's the story of a housemaid who dresses as a boy to impersonate her dead employer. She falls in love with the aristocrat she was planning to (gently) con. But while she's living as a man, she realizes that she doesn't identify as a woman. Today we'd say she's nonbinary or genderqueer. I have a soft spot in my heart for the old school romance girl-in-breeches trope, but it has a lot of homophobia and transphobia baked into it. For example, the hero often knows right away that the heroine is really a girl because of his manly prowess, or the hero is appalled by his confusing attraction to a "boy," and you have the big reveal where the heroine is traditionally feminine in a gown and so forth. I wanted to try my hand at a genderqueer version of the trope, with a bi/pan hero.
You’ve written several dogs, kittens, ducklings, lambs... what’s next? Should we prepare our beleaguered hearts for an anachronistic alpaca?
You don't know how badly I wanted to put a goat in It Takes Two to Tumble. But goats weren't common in the area I was writing about, so I reined in my impulses. The next time anyone complains about historicity in my books I'm going to be like "but look, no goats!" I have two dogs, and I spend a frankly embarrassing amount of time talking to them and thinking about them and in general making an idiot of myself where they're concerned, so it feels right for animals to populate the stories I write.
Any books you think we should be reading? Trick question, I know. Maybe pick a couple favorites?
I'm reading Ariah by B.R. Sandersand it's kind of amazing. Queer elves. Magic. Stellar world building and truly gorgeous prose. I've never read anything quite like it, and I kind of want everyone to read it so we can talk about it.
Kris Ripper's Gays of Our Lives was a reading highlight of this past year for me: it's so funny but also I cried.
And, because I think I've recommended this book in every blog post I've written this year and I don't see why I should stop now, Harper Fox's Seven Summer Nights is not only one of the best romances I've read, it's one of the best books I've read, period. It's a romance and there's a HEA, but there are lowkey fantasy elements.
But you want to see that cover, don't you? Alright, let's do this.
3
2
1 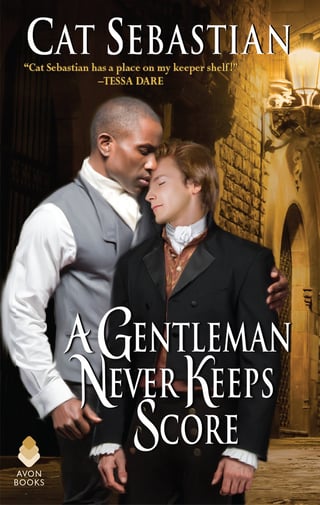 Here's a preorder link over at Amazon, where I'm sure that lovely cover will be going up soon. You can read more about Cat and her books at her site, catsebastian.com, or follow her on Twitter @catswrites.