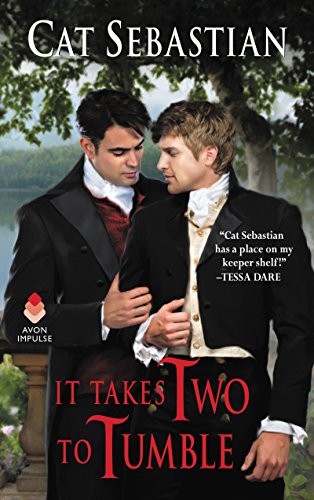 Some of Ben Sedgwick’s favorite things:

After an unconventional upbringing, Ben is perfectly content with the quiet, predictable life of a country vicar, free of strife or turmoil. When he’s asked to look after an absent naval captain’s three wild children, he reluctantly agrees, but instantly falls for the hellions. And when their stern but gloriously handsome father arrives, Ben is tempted in ways that make him doubt everything.

Some of Phillip Dacre’s favorite things:

Phillip can’t wait to leave England’s shores and be back on his ship, away from the grief that haunts him. But his children have driven off a succession of governesses and tutors and he must set things right. The unexpected presence of the cheerful, adorable vicar sets his world on its head and now he can’t seem to live without Ben’s winning smiles or devastating kisses.

In the midst of runaway children, a plot to blackmail Ben’s family, and torturous nights of pleasure, Ben and Phillip must decide if a safe life is worth losing the one thing that makes them come alive.

Review: It Takes Two to Tumble, by Cat Sebastian

What if Maria (from the Sound of Music) was actually a strait-laced vicar with a heart of gold and the Captain was still a captain? What if they had to navigate said vicar's dodgy family history, societal expectations, and an awful neighbor who was taxing his tenants out of house and home? And what if they had to do all of this with three unruly children mucking about?

Hijinks, dear reader. Hijinks and sexy boathouse shenanigans and stodgy men having those dreaded feelings about one another.

IT TAKES TWO TO TUMBLE is the first in a new series from Cat Sebastian, who writes male/male historical romance that is funny and sweet and full of banter.

Wait, you're still reading this and not off pre-ordering the book?

Fair enough. Let's talk a bit about IT TAKES TWO TO TUMBLE. Despite not being named HARDTACK AND HOMILIES or OF VICE AND VICARS, it was a delightful and carefully hopeful read. While it has several of the same elements as her previous three books, it felt simultaneously more juvenile and more mature. Let me attempt to explain.

As with the others, this novel works with one hero who is uptight and aloof and one hero who is outgoing. Unlike the others, however, these two heroes felt more nuanced, with bits and pieces of the other's primary traits. The Captain, Phillip, is accustomed to being in command and keeping himself apart from his crew and his family. He's also acutely vulnerable and possessed of a grief that is all the more devastating because he cannot name it. His lover died over a year ago, but they were neither public about their relationship or honest with each other about it.

Benedict (Ben) is the affable young vicar who visits the sick and sings bawdy drinking songs to dying men. He's loved by all and looks forward to settling into a comfortable, conventional life with his best friend, Alice. Unfortunately, Alice is quite aware that they lack the spark that she hopes for in her marriage, meaning that both of them are settling in rather a bad way. Ben is excellent with Phillip's three rowdy children, tricking them into learning with something we might think of as a Montessori style tutelage. Here's where the nuanced characterization comes in: Ben is the oldest sibling and took on far more responsibility than he should have, in large part because his father is a free love and peace sort of fellow who can't be bothered. Ben's primary goal in life is to not end up like his father, which leads him to a life of service and responsibility. Somehow, Ben wears both the costume of "dashing rogue" and "earnest vicar" simultaneously and without self-contradiction. (People are complicated, shocking.)

The relationship between Phillip and Ben is disgustingly sweet. (Not actually disgusting.) I don't know why any two people who are so clearly in like and love with each other should be kept apart, but hey... people are complicated. I shipped them at around page 30 and wanted to smack about all of the people and circumstances keeping them apart, which was usually the two men themselves. Yes, dear Captain, you should not abandon your motherless children and the love of your life to go back to sea for years at a time. Yes, dear Vicar, you should put aside your silly plans and self-sufficiency ideals and adjust your expectations for what a whole and happy life can be. This is a romance, so I knew they would sort it out eventually, but damn if I didn't yell at them a bit while they did so.

In addition to a tooth-achingly sweet primary romance, there are TWO secondary romances to root for. I won't spoil them for you, but I did very much enjoy them both. It's like one big love-fest, this book. The children, while present, are not whiny or awful, in case you were worried. They are nicely offset by a dog, ducklings, sheep, and many pies. And, while Sebastian also introduces us to two single men who I hope will find their own HEA's in future books, this doesn't suffer from "first in a series" syndrome in the slightest.

TL;DR - IT TAKES TWO TO TUMBLE is a love-fest of a book with plenty of jokes, farm animals, and pie. It's utterly delightful.