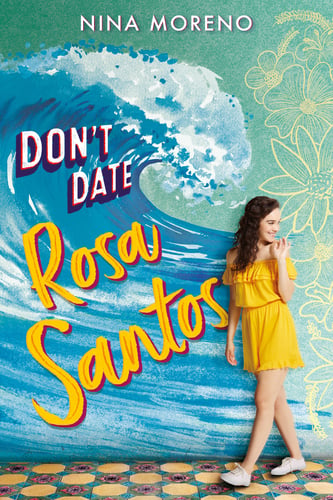 For fans of GILMORE GIRLS and TO ALL THE BOYS I'VE LOVED BEFORE, this effervescent love story from debut author Nina Moreno will sweep you away.

Rosa Santos is cursed by the sea-at least, that's what they say. Dating her is bad news, especially if you're a boy with a boat.

But Rosa feels more caught than cursed. Caught between cultures and choices. Between her abuela, a beloved healer and pillar of their community, and her mother, an artist who crashes in and out of her life like a hurricane. Between Port Coral, the quirky South Florida town they call home, and Cuba, the island her abuela refuses to talk about.

As her college decision looms, Rosa collides-literally-with Alex Aquino, the mysterious boy with tattoos of the ocean whose family owns the marina. With her heart, her family, and her future on the line, can Rosa break a curse and find her place beyond the horizon?

Although the book deals heavily with grief and strained family relationships, Don't Date Rosa Santos is a feel-good summer romance that made me smile. Reminiscent of Jane the Virgin, Rosa's Cuban-American family consists of her, her mother, and her grandmother. (More on this later.) They live in a multicultural small town in coastal Florida that feels a bit like Gilmore Girls' Stars Hollow... but not so white.

The romance is between Rosa and a young man two years older than her, recently returned to town. He's both a sailor (actual sailboats) and a baker, so he's essentially made of swoon. Rosa herself is a high school senior, trying to figure out where to go to college, if she wants to go to college, etc. She and Alex both end up planning a big summer festival to save the harbor from gentrification, so even though Rosa's not supposed to fall in love with a sailor (because of a curse that killed her grandfather and her father), she does.

Though it's definitely a romance, much of the conflict in the book originates with Rosa's complicated family. Rosa's grandfather dies on the journey from Cuba to Florida, while Mimi is pregnant with Rosa's mother. Then Rosa's father dies before she's born. Both of them died in the water, and the title of the book comes from the accepted lore that the family is cursed (they actually are) and that if they fall in love with a sailor, he'll die at sea. Because of this curse, Rosa's mother has been made something of an outcast in town and has spent her life since traveling the country doing art projects and coming back to Port Coral only to see her daughter for short stretches. She wanted Rosa to come with her, but Rosa wanted the stability of home and chose to stay with her abuela. Rosa's obsessive planning and analysis paralysis stem from the instability of her relationship with her mother. This whole dynamic makes for a nuanced and somewhat messy relationship between the three women, with lots of guilt and resentment and a deep, unconditional love.

Rosa chooses a college further away so that she can participate in a study abroad program in Cuba, but she can't tell Mimi because she knows she'll never approve. Diaspora and longing for the soil of one's home are big themes in the story, with each woman living both with and apart from her roots, both in Cuba and in Port Coral.

The storytelling in this book is seriously excellent. I finished it over a week ago and I'm still connecting threads. These women feel real and a little magical, with bonds that drive the story and have shaped Rosa's life in every way. Alex is a sweet and broody hero, which is pretty impressive to pull off, but wonderful Rosa is the star of the show, as she should be.

seriously, stop if you don't want this

I think it's far enough down the page now? Let's try it.

Spoiler: Rosa's abuela dies near the end of the book. It's clear that she knew it was coming, but the other women didn't. Rosa and her mother embark on a trip to Cuba to spread Mimi's ashes, encountering people from Mimi's past and breaking the curse. It's absolutely lovely and a celebration of life. I was sad, but only for a moment. Mimi's death brings Rosa and her mom back together and provides the opportunity for both of them to see Cuba for the first time. Mimi is still a major part of their lives (not as a ghost.