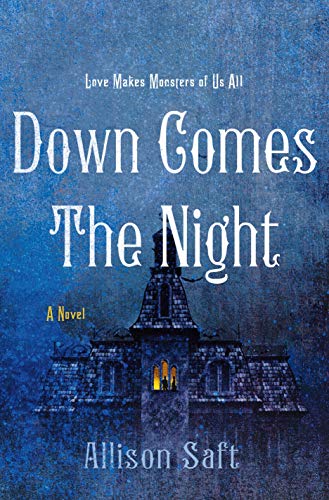 Review: Down Comes the Night, by Allison Saft

Down Comes the Night is pitched as a gothic romantic historical fantasy novel and it both fits and doesn't fit that framing. I've been trying to sift through the various subplots and characters to figure out the essence of the book and I'm not sure it quite came together in the end. A case of close-but-not-quite-there. However, I think this is a book that will work well for a lot of readers, so let's get into it.

The story opens as Wren, unrecognized niece of the Queen, is letting her empathy overrule orders once again. She heals a prisoner and he escapes. Her commanding officer Una--the woman Wren loves--is angry but defends her when they're brought before the Queen. Wren is stripped of her military assignment and given two terrible choices: have her magic surgically removed or go heal in the mines. Her desperation leads her to accept an offer that seems too good to be true and she escapes Una's escort to the mines to serve as healer to a notorious nobleman in a nearby, un-allied land.

When she arrives, she finds out that everyone in the manor is dead or mysteriously sick, including a servant who turns out to be the baddest bad guy and heir to the kingdom Wren's people have been at war with for generations. The two nations are currently at an armistice, but soldiers on the border have been disappearing on both sides and war is looming. Wren is bisexual and Una is an emotionally-constipated disaster so I'm glad they aren't end-game, but Hal wasn't as swoony as I was promised. The world seemed queernormative which is always a plus!

The blurb tells you that Wren and Hal fall in love and save the world, but it doesn't tell you how damn gross this book is. It's pretty quickly apparent that the lord of the manor is responsible for the illness and death among his staff, but it gets worse as the book proceeds. There's a lot of discussion of eyeballs and a scene with a "wet squelch" as a speculum is inserted to take out an eyeball. I could tell that the author did a lot of eyeball research because it's very descriptive. *shudder*

Okay so eyeballs and murder and lots of gore and medical ick in general. The romance is present and I think it was probably okay, but I never really bought into Wren's quick forgiveness of a mass murderer. Hal is deeply apologetic and wants to make amends, but he's still a mass murderer, you know? Your mileage may vary.

In all, there are gothic vibes here and a historical-but-not fantasy setting, but it's not a true gothic. The characters are trapped in the house by illness and a murderous nobleman, but there wasn't a building sense of dread, that creeping, growing feeling that I associate with a gothic. It's certainly dark, there's a terrible mystery and quite a bit of angst, but something was missing.

If you read it, I'd love to know what you think!

Audio Notes: Saskia Maarleveld narrates this and she's prolific enough that audiobook readers will probably recognize her voice and style. If you like her narration, you'll probably enjoy this. I found it atmospherically appropriate and her character voices are easy to distinguish.

I received a copy of this book from the publisher for review purposes.