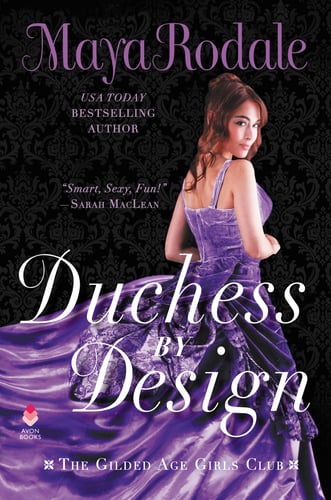 In the first novel of Maya Rodale’s enthralling new series, an English duke vows to make an American seamstress his duchess...

In Gilded Age Manhattan, anything can happen...

Seeking a wealthy American bride who can save his family’s estate, Brandon Fiennes, the duke of Kingston, is a rogue determined to do the right thing. But his search for an heiress goes deliciously awry when an enchanting seamstress tumbles into his arms instead.

...and true love is always in fashion

Miss Adeline Black aspires to be a fashionable dressmaker—not a duchess—and not even an impossibly seductive duke will distract her. But Kingston makes an offer she can’t refuse: join him at society events to display her gowns and advise him on which heiresses are duchess material. It’s the perfect plan—as long as they resist temptation, avoid a scandal, and above all do not lose their hearts.

Duchess by Design is pretty much what it says on the tin - an impoverished young Duke mistakes a young New York City dressmaker for her wealthy client and is immediately "enchanted" by her. What follows is a Gilded Age romance heavy on the feminism and lighter on the romance. If you enjoy reading about fashion, like in Loretta Chase's Dressmaker series, you'll enjoy this one.

The setting is fresh because, while Joanna Shupe has been exploring Gilded Age NYC for several novels, it's still uncommon in historical romance. And, unlike Shupe's books, the hero in this one is from the English aristocracy, making it something of a cross between Rodale's previous novels and Shupe's Gilded Age series.

The romance plot is straightforward, boy meets girl, boy has to give up goal of marrying for money in order to marry girl who has no money. Girl refuses to give up dream of owning her own dressmaking shop. Girl gets boy and dressmaking shop and a big group of friends. This is a very heroine-driven novel, and that's great. There are also several other women in the book who I can see getting their own books down the line.

The biggest conflict in the novel hinges upon the fact that the Duke wants to be with the heroine, but in his pursuit of her, he tarnishes her reputation. In fact, he follows her back to her place of employment at one point and she ends up getting fired for it. Scandal, it seems, isn't just for the London ton. At that point, the heroine is justifiably fed up with the Duke and refuses his offer of help, turning instead to that wealthy client he mistook her for. The client sets Adeline up with a group of women who are determined to help other women out of all manner of predicaments. Soon enough, Adeline is established and all that's left is for the Duke to marry one of the eligible heiresses in town or to give up on his goal of a "traditional" marriage of convenience.

This is a romance, so you can guess which one he does.

Overall, this was an enjoyable read, but I was more sold on the female friendships and the ambition of the heroine than I was on the romance. The hero was respectful and dashing, but I didn't remember his name to write this review. I did remember, however, the Black seamstress who works with Adeline and the queer-coded woman (she's probably straight, but hope springs eternal) who helps Adeline's career.

I'll be continuing with the series, if only for the dresses with pockets.

Suzanne received an advance review copy from the publisher via Edelweiss.