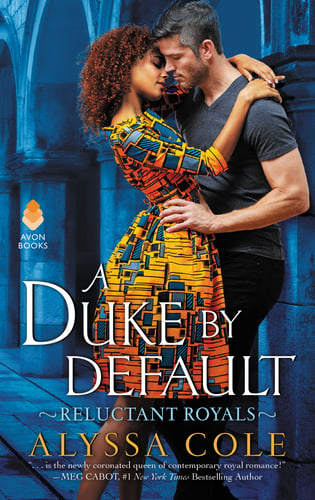 Review: A Duke by Default, by Alyssa Cole

Portia’s new internship, the one that she has pinned so many of her hopes and dreams on, gets off to the rockiest of starts. Misunderstandings pile upon miscommunications and leave both Portia and her new boss, Tavish, a master sword maker, with the worst of first impressions and a face full of pepper spray. But Portia is determined to make it work, even when Tavish turns out to be as stubborn and frustrating as he is attractive.

Portia was Ledi’s troubled and difficult best-friend in Cole’s A Princess in Theory (Reluctant Royals #1). In A Duke by Default, Portia is determined to remake herself. A Jill of all trades, a nomad and a perpetual student, she has dealt with her feelings of insecurity and her fraught relationship with her parents through avoidance and problem drinking. She only starts to forgive herself and start making progress on her “Project Portia”, when her sister sends a her a link to a video about living with ADHD.

“She’d always been told that she was flighty, flakey, lazy, scattered, impulsive...but she was also curious, and super engaged when something interested her. Still, the negative always outweighed the positive, and she’d always figured that she was just ... a fuck up.

Something in her loosened with relief as the possible diagnosis repeated itself in a loop in her brain. ADHD! ADHD! ADHD She had a word to use for her behavioral patterns. There were other people who felt the same way she did, maybe."

Pulled in too many directions and struggling to keep his armory afloat, Tavish is desperate enough to let himself be talked into accepting an apprentice he doesn’t want but he isn’t at all gracious about it. The grumpy wanker is suspicious of change, skeptical of Portia’s methods and hesitant to trust her. He is frankly a terrible boss. However he is determined to keep his commitments to his community so he is eventually persuaded to listen to Portia. However trusting Portia to manage his web presence is one thing, believing the surprising secret she uncovers about his family is something completely different.

Cole takes Portia and Tavish, who are at times both hard to love and have a hard time accepting love on parallel but distinct personal journeys where they have to reexamine the default ways they react to other people and reevaluate what they have come to think about themselves when confronted with life-changing truths that upend everything they thought they knew. I love difficult heroines, so I warmed up to Portia right away, but it took me a long time to warm up to Tavish. I did love, however, how he changes how he speaks to her, once he realizes how Portia is much more vulnerable and easily hurt than she lets on.

World-building is a underappreciated component in contemporary romance and Cole excels at it. She grounds her fantastical premises (the African prince in your spam folder is an actual prince, and you are the secret heir to a dukedom) by crafting a world that looks and feels modern and familiar. Cole uses little things such as how her characters use or avoid social media to the way she describes Tavish’s working class neighborhood, a mix of long-time residents, recent immigrants & affluent gentrifiers uneasily co-existing to build up a sense of place and currentness.

The only fault I found with the story was how quickly things turned for Tavish and Portia in the last quarter of the book. It jarred me so much that they only way I could move forward was to jump to the end and read backwards before I could go back read to their reconciliation. It was sweet, fairytale-like, yet it doesn’t erase the challenges they will face making a life together.

For fans of the previous book, Ledi and Thabiso make several appearances in the book as do other secondary characters from A Princess in Theory, but the book stands alone easily. I wholeheartedly recommend it!