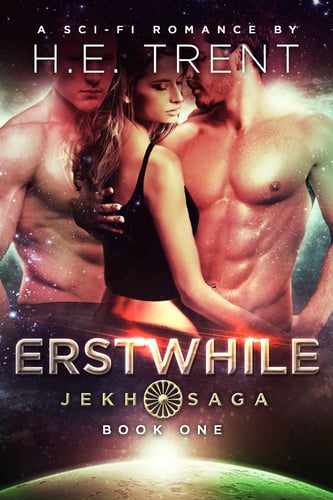 As an adamant opponent of Terran settlement on the planet Jekh, Owen McGarry made his family name synonymous with "traitor" on Earth. Lobbyists standing to profit from off-world colonization hinted that the Jekhans were preparing to declare war. Nearly twenty years after Owen's supposed death, his granddaughter Courtney wants to learn the truth--even if she has to travel to the far-flung colony to do it.

Court soon learns that not only was her grandfather right about the Jekhans, but that conditions on their world are far more hostile than she feared. Terran forces decimated the population of the resident human-alien hybrids, and the people who remain seem to be all out of fight. That is, except for the pair of men Court finds hiding in her basement.

Fugitives Murki and Trigrian see a future in Court. On a planet where so few women remain, she has the potential to be the mate the lovers need. And more, she could become the advocate for their people that her grandfather didn't get the chance to be.

When the corrupt local government seeks to punish Court's friends and family for her actions, she has no choice but to make a stand. If it takes a riot to make the people on Earth see that they were misled about Jekh, she's more than willing to start one. After all, her reputation couldn't possibly get any worse.

Holley Trent is prolific. She has so much PNR that I have a difficult time telling people where to start. That said, H. E. Trent, her SFR pen name, is pretty much just the Jekh Saga. So how about we start there?

As you might guess from the cover, Erstwhile, book 1 in the Jekh Saga, is a menage or polyamorous romance with two men and a woman as the main characters. Courtney McGarry is a Terran, or person from Earth, who travels to the planet Jekh as an unwilling colonist. Her family is being persecuted on Earth for her grandfather's resistance activities, so she heads off to Jekh as a law enforcement officer. When she arrives, she meets Trig and Murk, a Jekhan couple who are hiding in a closet in her new home.

What follows is a very complicated plot, with secrets and explosions and sexytimes and a bunch of women teaming up. You see, women are in low supply and high demand on Jekh, meaning that they're both prized and exploited by the human colonists. Jekhan men seek out the stability of pairings, while Jekhan women tend to participate in domestic life only to make the babies. Then they leave and the men raise the kids. There's also a hormonal aspect, men needing female companionship to balance their hormones and so on. It makes a lot more sense in the book.

I'll admit, I went into this expecting way more sex, but Courtney is left on the outside of Trig and Murk's relationship for a big chunk of the book. (Their relationship is a journey for all of three of them that isn't resolved until the end of the story.) Anyway, once you realize that you're getting a big sci-fi story with lots of moving parts and some secrets, it's quite enjoyable. The sex in the book is very good, by the way. Lots of dirty talk and some dom/sub dynamics that make for an interesting three-way relationship.

Do I recommend Erstwhile? Yep. While it wasn't quite the escape I expected, I really enjoyed it as a resistance romance and I loved Courtney and Trig. Court is alpha and she and Murk butt heads a bit, which I also liked.

"Oh." Trig cleared his throat. "We... haven't had a balanced meal since the removal. So, thank you."

Her forehead furrowed. "The removal?"

How does she not know these things? Conquerors should know their own history.

Some of this is exposition for Courtney and for the reader, but it's also the author and the characters taking a stand against exploitation and abuse. The Jekhans are presented to Terrans as an ugly, monstrous race, which Court quickly realizes is propaganda. In fact, one of the reasons the planet was so quickly conquered is because they're pacifists.

In all, I can't recommend Erstwhile as purely escapist sci-fi romance, but it also doesn't perpetuate the abduction narratives that a lot of SFR falls into. No ships full of white women being dumped on a strange planet. Instead, there's complex worldbuilding, character development, and a heroine who is both part of the problem and part of the solution.

I'll definitely be continuing with the series.