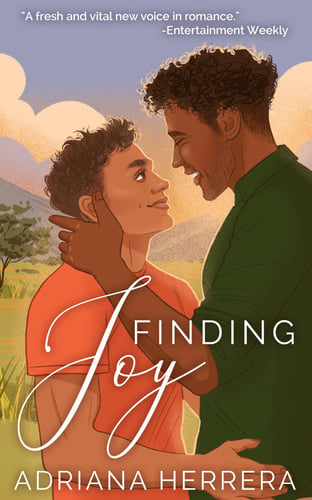 Desta Joy Walker returns to his first home, Ethiopia, a man with big shoes to fill and even bigger decisions to make. His father’s legacy and the love his parents had for the land shows in his very name, which means “joy” but he’s grown weary of walking the path his father was on before his tragic death. Desta wants to find his own way but a recently broken heart and fear of disappointing and hurting his mother make that feel like an impossible dream. Elias Fikru loves his homeland, his heritage, his family...and other men. The freedom to be all of who he is within reach, but only if he’s willing to leave the life he knows and the land he loves behind. When Elias and Desta meet, their separate paths towards their individual truths converge. Love takes hold and won’t let go, leaving Desta and Elias to decide whether their individual and collective futures are in Ethiopia or the US, together or apart.

This book is so well written. My biggest pet peeve with only getting one POV is I always feel like I’m only getting half the story, half the characterization, and half the emotional depth. That doesn’t happen here. Even though we only get Desta’s POV, Elias is so beautifully brought to life that we know exactly who he is at his core and we’re able to fall in love with him right along with Desta. The pining is paced beautifully. It’s a slow but not too slow burn, that takes enough time to build the tension and make you invest in the relationship. Both the MC’s and the supporting cast are well developed and you will definitely love some and want to throat punch others.

There are weighty themes explored (xenophobia, white savior complexes, the reality of having to remain closeted for your physical safety and freedom, familial obligation, mental health) but each are handled with the reverence and respect they deserve. I especially appreciated the way Herrera makes it clear that Elias should have the right to live and love openly in his homeland, without demonizing and disrespecting the culture and people of Ethiopia. They aren’t presented, as so many authors so often do when tackling similar themes, as backwards evil savages. Elias isn’t painted as poor, put upon victim waiting to be swept away to freedom and Desta isn’t the “enlightened” hero swooping in to teach the locals and save the day. Instead, you have two characters who celebrate the beauty, depth, richness and history of the culture while acknowledging where things need to improve.

My only complaint is that there were some points in the story where things I would have liked to have seen were summarized but that’s a small quibble in what is overall a fantastic book and a beautiful love story about honoring your truth, falling in love, and having the courage to find and hold onto, joy.

Dylan received a copy of this book from the author for review.