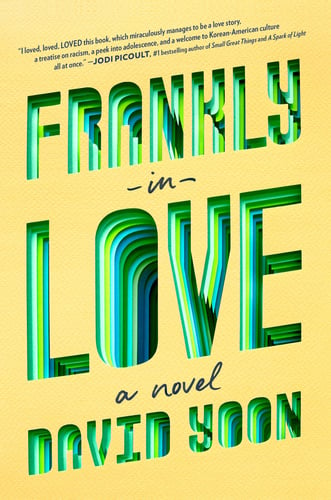 Frankly in Love is a coming of age story: big life-changing events with a couple of love stories in the mix (read the content warnings as you need, please). I, a confessed fake-dating addict, read this book because there was the promise of fake dating, with the complication that Frank is dating Brit while he pretends to date Joy. Add the other complication that Brit does not know about the fake dating that is done to appease Frank’s Korean parents who would have a fit if Frank dated a white girl.

In a way, the book can be broken into three parts: 1) racism and fake dating, 2) dating the Korean girl of your parents’ dreams, and 3) life gets hard. And these three parts felt fairly distinct. Racism and fake dating is literally that Frank’s parents are racists towards anyone not Korean and Frank’s secret girlfriend’s family is racist with microaggressions they likely could never see. While secretly dating Brit and fake dating Joy, Frank has a realization on what love is and dumps Brit as he and Joy roll into real dating.

Part two, with the falling in love and being in love, is a pure joy (no pun intended). There’s so much hope and fun in those chapters as Frank and Joy grow closer. And in my heart, as we approached the third part, I knew that my two lovelies would not make it because their lives blew up in front of them because of a variety of pressures and events.

There is an aspect of YA romance where I do not ever believe that there’s an HEA. It’s always an HFN to me because these are kids and they are about to make big changes to their lives, and relationships are hard enough when you live in the same town and have an idea of your future. So the fact that this is not a romance with even an HFN actually resolved my anxiety about what happens when they leave for college because the world is open for Frank and Joy. Except, as with coming-of-age stories, nothing is easy.

Frank’s parents own a convenience store and one night, while Frank and Brit are on a date, Frank’s father is shot in what I believe was intended to be a hate crime (but the motive was covered so fast that I’m not positive). And this is one of the moments that brings Frank and Joy together as he can’t seek comfort from his real girlfriend, but his fake girlfriend (who is his friend) is there. This shooting is what reveals that Frank’s father has cancer, but we learn this much later. And well, the book pretty much ends with his father’s death. This is one of those times when you can see all the paths the book could have taken and then you got the cancer book, and disagree with choices.

It's difficult to state what my feelings are about this book, because they changed with each part. With Brit and fake dating, I was anxious and struggled. With the dating the perfect girl part, I was happy. With the last part, I was sad. If I leave you with anything, I want to reiterate, this is not a romance.