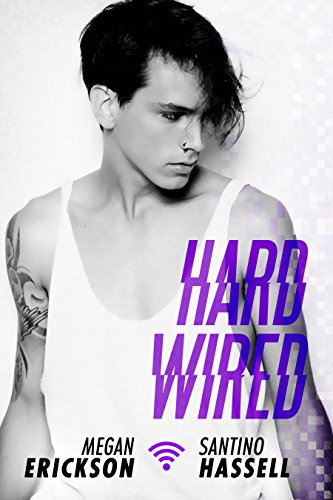 My FallenCon agenda is simple: sit on a couple of panels and let people meet the real me. Jesse Garvy—mod of a famous Twitch channel and, if I ever come out of my shell, future vlogger. I definitely didn’t plan to sleep with a moody tattooed fan-artist, but he’s gorgeous and can’t keep his hands off me. There's a first time for everything, and my first time with a guy turns out to be the hottest experience of my life.

But the next day, I find out my moody fan-artist is Ian Larsen AKA Cherry—someone I've known online for years. And he'd known exactly who I was while shoving me up against that wall. Before I figure out whether to be pissed or flattered, the con ends.

Now we're back online, and he's acting like nothing happened. But despite the distance between us, and the way he clings to the safety of his online persona, we made a real connection that night. I don't plan to let him forget.

HARD WIRED is the third in Megan Erickson and Santino Hassell's co-written Cyberlove series and, while it wasn't quite as perfect as the first two, it was still a really solid read.

Jesse Garvey and Ian Larsen, known to the world as Garvey and Cherry, are chat moderators (mods) for one of the heroes in the first book, STRONG SIGNAL. They've never met in person and, for all Garvey knows, Cherry is an adorkable anime fangirl. Cherry turns out to be the alter-ego of broody fan-artist, Cerise.

Ian/Cherry/Cerise doesn't tell Garvey who he is when they first meet, going so far as to hook up with him without revealing his identity. As a reader, this part felt icky, but the authors never try to make it sound okay. Ian feels awful about it, and it's disclosed early on that he has social anxiety caused by past abuse. I appreciated that Garvey finds out the next day, at a panel they're both on, rather than this piece of subterfuge becoming the big misunderstanding upon which the relationship balanced.

Ian's identity issues remain central to the romantic conflict in the novel, since he's used his Cerise identity as armor and as a way to reclaim his sexual agency after childhood trauma. Garvey wants him to publicly acknowledge their relationship, which is a pretty reasonable ask. I listened to this on audio, and up until the last 30 minutes or so, I had no idea if/how the two would reach a compromise. (They do, of course.)

As with the first two in the series, these characters are at something of a crossroads in their lives. Garvey's parents continually ask him for money, which puts him in a horrible position both emotionally and financially. He's not able to physically move on, since he thinks he needs to support them, and he's not able to start his own streaming channel because he lacks the confidence in himself. His parents didn't give him the tools to build a successful career, after all. Garvey's also just realized that he's gay, but this isn't an "issue" for anyone in the novel. (Hallelujah.) Ian, however, is isolated and professionally unsatisfied. His art doesn't pay enough to support him, but he's applied for a prestigious art program and hopes to go into animation.

Perhaps because both of them are at that "who am I and how do I become my real self" stage, I was really frustrated with both characters for a good portion of the book. It seemed like neither of them was making an effort to understand why the other person had the emotional hangups they did. Eventually, they figure it all out and, having the HEA/HFN in hand, I'm willing to ignore the heads-up-their-butts aspects of each character's arc.

So, is HARD WIRED for you? It's pretty dang full of sex and angst. Lots of long-distance chats, complete with sexting, dirty Skype calls, and those awkward conversations where you're trying to talk about something important and the keyboard just isn't cutting it. They're super geeky, too. These books are full of the kind of deeply emotional sex that runs the full spectrum of angry to sad to happy to relieved. They're the kind of rather filthy book that still manages to tie each sexual encounter to plot progression and development of the relationship. If that's a thing you're interested in, you'll probably like HARD WIRED. While they can each be read as a stand-alone, I think there's value in starting with the first. For example, I know the heroes of book #4 now that I've met them in this book... and I can't wait to see how much they piss each other off.