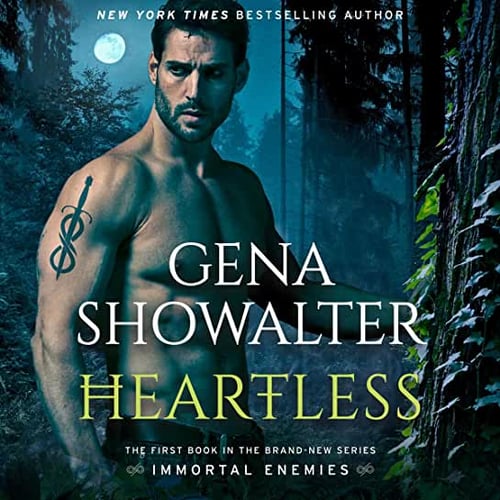 Don’t miss the first book in New York Times bestselling author Gena Showalter’s sexy, heart-pounding new Immortal Enemies series about a ruthless warrior hellbent on revenge, the fae princess determined to thwart him at every turn, and the desire that threatens to consume them in Heartless.

Kaysar the Unhinged One, fae King of Midnight, can drive anyone to madness with his song. A ruthless warrior forged in hate, he lives to force his enemies to their knees. He will stop at nothing to succeed—even abducting and seducing his foe’s beloved bride to ensure his own child one day sits on the male’s throne. Except, his prize escapes to the mortal realm before the first kiss, her heart transplanted into a human beauty with dangerous secrets…

Chantel “Cookie” Bardot is a professional gamer girl great at trash-talking, bad at peopling. After a long-awaited surgery, she begins to morph into a powerful fae princess. Catapulted into a strange land ruled by a cruel but seductive villain, she must battle flesh-and-blood monsters and navigate royal intrigues. But the true danger is Kaysar, whose every wicked touch tempts her beyond reason. Should she run…or descend into the darkness with him?

Gena Showalter starts a new series with Heartless, a paranormal romance that gave me the Immortals After Dark vibes I've been missing.

Kaysar is a rather terrifying warlord type with a magical voice that can command people to do what he wants. Kidnapped and abused for years as a child, he's sworn revenge on the fae royalty who hurt him and his sister. When the book starts, he's watching from the shadows as the son of his abuser and the son's mate get it on. Naturally, he interrupts them and attempts to kidnap the princess so he can seduce her and put his own son on the throne. She has the ability to make portals, however, and flees to the human world. Before she can, Kaysar commands her (with his fancy voice) to return to him.

Cut to Cookie, a professional gamer streaming on the equivalent of Twitch as she defeats her crappy ex. Cookie has been disabled since childhood and her failing heart has her worried for her future. Suddenly, she gets the call: there's a heart for her! And of course it's the fae princess's heart. Cookie starts transforming--not just healing but physically changing. Her hair, eyes, etc. And then one day she *oops* makes a portal and falls into Kaysar's world. Remember that command? Apparently the heart does.

There are so many things I loved about this book, but in the interest of brevity, here are a few:

- Cookie loves shiny things and doesn't apologize for it. Kaysar gives her all sorts of jewelry and she takes it and makes it clear it's not winning him any points.

- Cookie knows her way around this world because it's the world from the game! Can you even imagine popping through a portal into your favorite video game and snagging yourself the hottest homicidal fae king around? I mean seriously.

- Kaysar is an absolute jackass, but he's incredibly insistent on consent because of the abuse he suffered as a child. Yes, he does the murder stuff, but he's not an alphahole in other ways. And whew, Cookie knocks him down like 8 pegs.

- Cookie's own power is really cool. I'm not sure I should spoil it for everyone, but it's something I hadn't read before and I was thoroughly entertained.

- Adam Gold did the audio narration for this and though the book is dual POV, I didn't mind at all that he did the whole thing. He's got a delicious voice, with a deep timbre that really works for Kaysar (and apparently me). I'm hoping he does the rest of the series as well.

In all, this was the paranormal romance I wanted it to be. The chemistry and banter between the two MCs is perfection and I loved that Cookie is not quite the typical bratty heroine who tames the beast hero - she's also kind of bloodthirsty! Her best friend is a retiree and they live with an evil cat and I just loved her so much. Even when she was murder-y.

Content Warnings: past ableism and misogyny, references to past repeated and extensive sexual and physical abuse of a child (not detailed), murder, threat of sexual assault, possibly genocide? Kaysar has done shitty things but they're sort of "he conquered the X region" so whatever that entailed