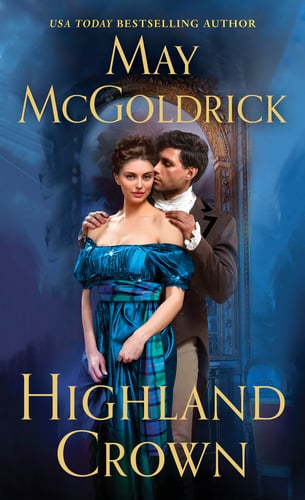 Review: Highland Crown, by May McGoldrick

Highland Crown is a Scottish romance between a Highlander and a Lowlander, both on the run from the British authorities for aiding Scottish rebels and well... shooting a soldier. The authors, a husband and wife team, call it an adventure romance, and that's absolutely true. There's a lot of hiding and escaping and stabbing. The hero is shot not once, but twice. (Thankfully, the heroine is a doctor.)

What I didn't realize until after reading it, however, is that this is just book one in a trilogy. The heroine has two sisters whom I'm led to believe will have romantic arcs in the next books, but the primary couple's arc isn't resolved at the end of this book. They have an HFN (happy for now), but there's a huge plot point dropped in just 15 minutes from the end of the audiobook. The author's note gives us some details as to what we should expect, but I had absolutely no idea from the blurb that this wouldn't have a tidy ending.

As a quick aside - the audio narration is done by Saskia Maarleveld and Raphael Corkhill. Maarleveld's accent dips at times, but Corkhill's is lovely. Each chapter begins with a quote from Sir Walter Scott, and the prologue is from Scott's POV. It's an interesting structure but not a bothersome one.

Other than this irksome non-ending, I enjoyed the story. It takes place in 1820, which is during the clearances, so the Scottish people are rightfully pissed. There are strikes and protests and horrible crackdowns from the British. It's certainly not the balls and gossip columns and Ton that we read about most of the time in 1820's England. The heroine is recently widowed, her husband having been executed by the Crown for treason. Though their marriage was one of convenience, she does grieve during the book, and I was grateful that they didn't force a "virgin widow" plot. The hero is younger than her and has just lost his ship, The Highland Crown, plus most of his crew and the entire cargo, comprised of outlawed weaponry for the rebels.

Overall, this book is low on heat and high on action. The story isn't exactly closed door, but it's also not explicit and there are I think only two scenes of sexual intimacy in the book, one of which is fade to black. I absolutely bought into the romance between the two main characters, and the political intrigue and history propelled me through the story. If you're interested in a historical that doesn't otherize the Scottish characters and is rich in historical references, this very well may the book for you. Just beware that it's part one of a trilogy.