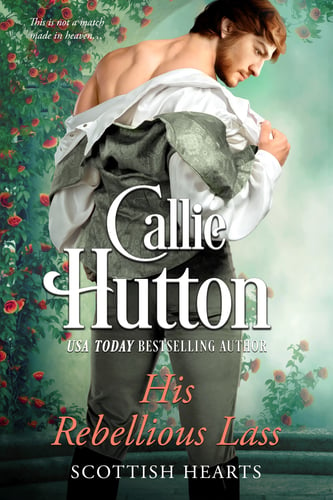 Sometimes, a book just really has too much plot - this tends to go with a lack of characterization - which is true of His Rebellious Lass. When this happens, the book tends to be a series of events and it never grabs hold of my attention.

Here is the honest truth: I could tell you the plot of the book, but I could not tell you much about the characters at all. Cam doesn’t want to marry because he was abused as a child by his father and doesn’t want to do the same to his future child and because he wants revenge against his dead father. Bridget doesn’t want to marry because she doesn’t want to be controlled by a man, especially after her best friend was killed by her husband from a variety of injuries. All of this is valid, but there’s never any time spent with these issues. They are repeated a few times, but you never get a good look at the characters having these thoughts and feelings.

The book moves from location to location, from plot point to plot point, but all I know about these characters is listed above and that they think each other hot. Even as they are claiming that they love each other, there’s no depth to it, there’s no sense that they could ever make it as a couple beyond the end of the book because they don’t really work as a couple within the book.

So much of the book revolves around Bridget wanting to open a shelter for abused women, but it feels more like set dressing. Bridget and Cam argue over whether she should start this shelter, they visit locations, they are given an abandoned child (Cam’s sister quickly takes the child), but there’s no real emotion to get you invested.

And then there’s Cam, who is mostly fine until they have sex. All of their kisses up to that point are awkward in that as each one ends, he says that he won’t apologize for the kiss, but that they can never marry. It’s only when she is threatened with ruin that they do sleep together. Similarly, they only marry because she is ruined. But in the midst of having sex, Cam literally thinks “but where’s her barrier? She’s not a virgin!” Ignoring that Cam has a really bad understanding of vaginas, why does a notorious rake care? And why, immediately after sex, does he ask her who she lost her virginity to? It’s a whole thing that’s exhausting and then Cam gets a lesson from a doctor on the truth about hymens. So, yeah, there’s weak grovelling over not understanding hymens.

Consider this fact: this is a ward-guardian romance, and I have no complaints about that because it’s all just sniping about how he wants to marry her off and she doesn’t want to marry. I literally did not care about the power dynamics of this book at all because everything else kept me busy trying to keep up.