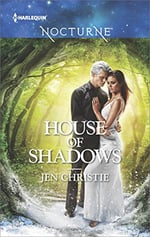 By now maybe you've noticed that I've been on something of a gothic romance kick lately. Maybe you don't follow my reading that closely. This is expected, you are a real human with better things to do. (Unless you're Google crawling the internet, in which case hiiii robot overlords.)

This post is already bizarre and rambling, but let me tell you... it's got nothing on the book I just read.

On to the very WTF book I just finished. House of Shadows is theoretically a love triangle. One woman travels in time and falls in love with two different men, separated by 150 years. From the back cover: "Torn between two centuries…and two men."

How bonkers is it? Well, at one point while reading the book, I said to our reader Discord server "I really hope this woman isn't going to f--k her great-grandson."

Now, some (a lot?) of this is on me. The blurb contained not-very-subtle hints. "And Keat Arundell is every bit as brooding and intriguing as his ancestor—her former lover—had been."  And "For if she can't close a loophole in time, the man she's come to love will never exist…" In retrospect, that last quoted line should have been more obvious.

One might conclude that I'm not a close reader of book blurbs. One would be correct.

Impoverished, illegitimate Penrose steals the job of a young woman hired to be the new assistant to a reclusive inventor of mechanical men (early robots) in 1880s Charleston. He's a tortured soul, beaten and hidden by his family for his albinism. Don't start me on his weird commentary about judging people on the color of their skin. They're both staunchly anti-slavery and Penrose was born the last day of the Civil War, but this was just clunky phrasing. Okay, so there's a Beauty and the Beast vibe happening, where he's super grumpy and she falls for him anyway. Normal right?

But then you find out about the boy living in the walls. Carrick, our 1880's Arundell, is supposedly this kid's father, though no one in the village has proof other than that the kid also has albinism. When Penrose confronts him about his complete neglect of the 10 year old boy, he's like "it was good enough for me as a child, it's good enough for him." THE KID IS LIVING IN THE WALLS. Technically there are hidden tunnels in the house and that's where he's living, but but Penrose is like "well, if you're not going to take care of him, I will." And that's that! She still falls in love with Carrick and they have a lot of unprotected sex.

One day, there's a giant earthquake and Penrose is sent forward in time to 2015. She's in the same house, but the manor has been moved to Colorado. Turns out the present-day Arundell guy is mega-rich off of inventing some modern robots and moved the whole place. No, I don't know how he did it and either does the author.

So now they've met and of course he's like umm time travel what? He takes her into town for a makeover and clothes, which is ridiculous because she gets waxed and plucked and has her hair bleached so now she's blonde, like some sort of bizarre one-day transformation into the modern expectation of white femininity... But I digress.

They have lots of pants feelings which supposedly mean they're in love. They have a lot of sex and it's at this point that I started yelling about incest. But like, maybe she didn't get pregnant in the past! Maybe it's just a grandpa kink and I'm being too judgy, right?

Turns out the tunnel is a time-travel portal and here are the reveals that happen in the last like, 10% of the book:

1) CJ is actually Carrick and he's been traveling through time this whole time. This is why there's no proof that Carrick is the kid's father and why both of them lived in the walls as kids. It also explains why CJ is so good at robotics. And why CJ appears in 2015 to tell Penrose she has to return to 1885. (By explain I mean "what the fuck is happening?")

2) Penrose stole the job from HERSELF. They were in the same inn at the same time because there's this loop she's been stuck in for a very long time. Keat goes back in time with her? I don't understand either.

and the final, most bizarre one -

3) In order to stabilize the time loop, Penny has to stay in the past, with Carrick, and Penrose has to go to the present, with Keat.

Remember how concerned I was that Penrose was f--king her great-grandson? She is! But she's not, because time travel and even though they're the same person they're not the same same person?

I don't really understand time travel and unfortunately I don't think this author does either.
Unless she wanted this heroine to have an HEA with one man and also with their grandson.

Side note - Why does the cover have the 1880's hero (modern hero does not have albinism) and the heroine in modern dress? Where is the modern couple? Why is this book all over the place and time?

This concludes my review of a completely bonkers, probably incestuous love triangle book.

If you'd like to go on this journey with me, it's available in ebook and audiobook (affiliate link). Both formats are available on Hoopla, too.