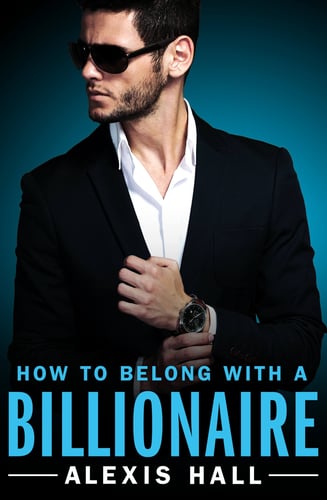 Review: How to Belong with a Billionaire, by Alexis Hall

How to Belong with a Billionaire is an empowering story about being free to express and explore your desires, and enjoy sex however you like it (consensually, obvs). It's also about finding your freedom and identity outside of being an abuse survivor. And because Alexis Hall's writing is a wonderland!!! [crying emoji] [confetti emoji] [sparkles!] sentences like "And my love was a dog off its lead.", even when the story is about heartache (and this one is), there's joy in the way he makes mundane things feel like moments of awe.

Arden St. Ives is radiant and confident, gentle and kind, and so damn hopeful. He is a rainbow among the light beams that are Alexis Hall books. I do not know the actual science behind this metaphor, but I know it to be true in my heart. But, if you're in it for the Caspian-Arden romance (not just fangirling over Arden & Alexis) here's the thing:

But I'm here for Arden so I was all in! Belong is a perfect balance of giggling at Arden's quirky comments and witnessing the patience, perseverance and open-hearted generosity with which he goes through life. --His very full, very dramatic life! There's surprise parental drama, the highs and lows of living with Ellery, a moment in the spotlight as a photographer's muse, and the paparazzi are still following him for a scoop.

A moment I especially loved is: "And I had this... this clarity now --as if I'd finally ripped off the dirty glasses of my own insecurities and could see the world as it truly was. Full of hope. Adventure. Possibility. Nothing I couldn't handle."

Andrea received a digital review copy of this book from the publisher in exchange for an honest review.