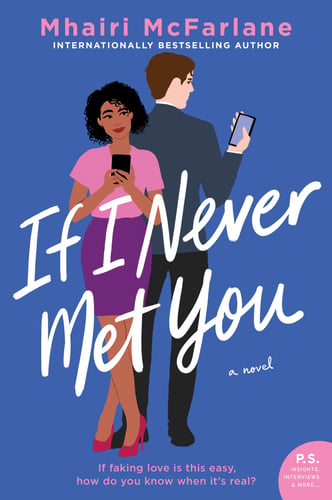 One of Shondaland's 5 Must-Read Books for March!

If faking love is this easy... how do you know when it’s real?

When her partner of over a decade suddenly ends things, Laurie is left reeling—not only because they work at the same law firm and she has to see him every day. Her once perfect life is in shambles and the thought of dating again in the age of Tinder is nothing short of horrifying. When news of her ex’s pregnant girlfriend hits the office grapevine, taking the humiliation lying down is not an option. Then a chance encounter in a broken-down elevator with the office playboy opens up a new possibility.

Jamie Carter doesn’t believe in love, but he needs a respectable, steady girlfriend to impress their bosses. Laurie wants a hot new man to give the rumor mill something else to talk about. It’s the perfect proposition: a fauxmance played out on social media, with strategically staged photographs and a specific end date in mind. With the plan hatched, Laurie and Jamie begin to flaunt their new couple status, to the astonishment—and jealousy—of their friends and colleagues. But there’s a fine line between pretending to be in love and actually falling for your charming, handsome fake boyfriend...

Review: If I Never Met You, by Mhairi McFarlane

Today's review comes to us from Carole V. Bell. Find her on Twitter here!

Author Mhairi McFarlane is endlessly witty and deceptively sophisticated in her storytelling. Her sixth book, If I Never Met You, combines an office based, fake relationship contemporary romance with the woman rebuilding her life after a breakup story-line that is so common in women’s fiction. It’s full of exactly the kind of quotable, wry social observation that I love. The result is a triumph and easily one of my favorite comic novels of the past year. I’ve read all but one of her previous books, and even so, this one turned out to be so much more than I expected: smart, funny, poignant, thoughtful and thought provoking, and a little heartbreaking (just at first). If I Never Met You will challenge you, but if you’re a fan of fiction that crosses those genres together, you’ll probably like it a lot, just like I did.

At the center of the story is Laurie, an attorney in her thirties who gets blindsided by the abrupt dissolution of a long-term relationship with a man she’s been with her entire adult life and jumps into a not-so fake relationship with a roguish colleague several years her junior. Laurie made all sorts of compromises, from waiting to have a child to investing in Dan and his career to the detriment of her own. She now has a heightened, painful awareness of how misguided that was and to make matters worse, Laurie’s ex is also a colleague at her law firm, and the whole office is abuzz with the news of their breakup.

The story is told in the third person, but we are deeply immersed in Laurie’s point of view. This is a good thing because Laurie is insightful, keen-eyed, and very funny. She has a strong perspective and a distinctive voice. Plus, despite her myriad of lovely qualities— she’s smart, successful, and attractive— she’s also very human. Sometimes insecure, sometimes vengeful. She’s a woman scorned who’s determined to get her own back by living well, rather than boiling a bunny.

With that balance of light and dark, seeing the world through Laurie’s eyes is highly entertaining. At an after work get together for instance, when she’s surrounded by the young and trendy, we’re told that “Laurie felt like a dishwater-feathered pigeon in an enclosure full of chirruping tropical birds.” That’s certainly a unique way of thinking about and phrasing those highly relatable sentiments.

When we first meet her eventual love interest, Jamie, it’s in that same alcohol infused social setting, just before Laurie’s breakup with Dan. She’s observing Jamie at a distance with horror, superiority, and self-satisfaction. In fairness, he doesn’t always make the most prudent choices.

That whole situation is devastation from top to bottom. There’s no doubt Laurie gets knocked around a lot in this story. And I felt it. I was embroiled and invested in the story emotionally. That’s a good thing. But that start was significantly sadder than I expected or wanted given that this was billed as a romantic comedy, so it was jarring and took me a while to get over that.

Looking back, my willingness to forge ahead through the difficult parts was propelled by my confidence in Mcfarlane as a writer who deftly incorporates elements of women’s fiction while also delivering on the main genre of romantic comedy. When things got rough, I knew that there was a strong romantic relationship ahead and a happy ending in Laurie’s future. If that sort of combination isn’t your taste, this might not be the book for you.

Thankfully, I was richly rewarded for my faith. I’m a Fake Relationship skeptic, but in this story, I really felt the emotional lure and situational logic of this trope despite the obvious risk. Laurie’s feeling more than a little bruised. She wants to rid herself of the stink of rejection and maybe get her own back at her ex, Deceitful Dan. Jamie, the office bad boy, wants to be taken more seriously and play down his playboy reputation.

Once they connect, the joy vastly outweighs the angst, though in truth, if I were Laurie’s friend and heard her already infamous bad boy suitor describe himself as “kind of a communist when it comes to relationships,” I’d tell her to run a mile. Jamie’s professed beliefs about committed relationships are the highly suspect philosophy of a cynic at best, playboy at worst. He has a jaundiced view of love, and he is truly committed to it at first. Of love he also says, “I only hope it never happens to me. It looks from the outside to be a temporary heightened manic state during which you do yourself all kinds of damage and make reckless promises you can’t keep.”

That pronouncement shouldn’t lead to anything other than friendship, right? And yet when it does, it’s glorious. Though this is primarily Laurie’s story, Jamie gets better and better and more interesting as we get to know him. He is roguish, but this isn’t a story about a rake reformed by love. Laurie’s snark to the contrary, Jamie isn’t Draco Malfoy. He isn’t an alpha, or a beta male. Or a cinnamon roll hero full of gooey goodness and too good to be true. The truth is more complex than that. And that’s what makes their love story work-- depth. He’s privileged and a bit reckless, but Jamie already knows how to love. He has loving relationships with his family and his best friend. He’s flawed, sensitive, funny, and loving. Human. And smart enough to recognize that Laurie is special and worth the leap of faith.

The one caveat I have is that even though the text struck a convincing and relatable chord with the issues Laurie faces because of as a mixed race women of Afro-Caribbean heritage, this isn’t an own voices story. Perhaps as a result, sometimes the language that’s used in discussing race sounds a little awkward, and the treatment of race overall may have been quite different with a writer of that background.

Despite the daunting start and sometimes heavy subject matter, the story was undeniably compelling and, eventually, romantic, joyful, and fun. Plus, did I mention it’s funny? Mhairi McFarlane is a sharp social observer with a gift for language and humor. I got irretrievably tangled up in Laurie and Jamie’s story and the particularly witty, edgy way If Never Met You tells it. That said, it’s a low heat romance with strong elements of women’s fiction. If that doesn’t throw you, I highly, highly recommend this book.