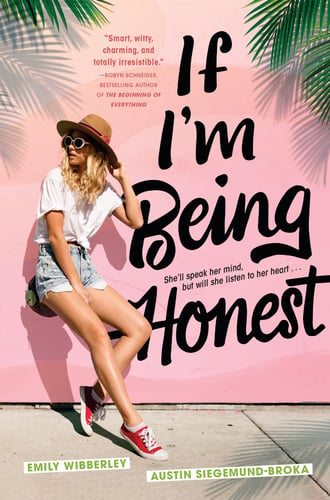 Cameron Bright's reputation can be summed up in one word: b*tch. It's no surprise she's queen bee at her private L.A. high school--she's beautiful, talented, and notorious for her brutal honesty. But when she slips up in front of her crush, Andrew, any affection he may have had for her quickly fades. To win him over, Cameron resolves to "tame" herself, much like Shakespeare's infamous shrew, Katherine. If she makes amends with everyone she's ever wronged, Andrew will have to take notice. Thus, Cameron begins her apology tour with Brendan, the guy whose social life she single-handedly destroyed. At first, Brendan isn't so quick to forgive, but slowly he warms to her when they connect over a computer game he's developing. To Cameron's amazement, she actually enjoys hanging out with Brendan; he appreciates her honesty in a way Andrew never did, and she's left wondering: maybe you shouldn't have to compromise who you are for the kind of love you deserve.

Review: If I'm Being Honest, by Emily Wibberly and Austin Siegemund-Broka

As you might guess based on the blurb, If I'm Being Honest features a prickly heroine. The story is loosely based on Shakespeare's The Taming of The Shrew, except that this time the shrew is out to tame herself. After her crush and good friend drops her entirely after witnessing how mean she is to a classmate, Paige, Cam decides to win Andrew back by becoming a better person. She learns that apologies are really difficult when you don't mean them, but that honesty can be used in kind ways as well as in the cruel ways she's been wielding it. And more than anything else, she learns that everyone else is more than they appear to be, just as she is.

As with most YA, this is something of a self-discovery or coming of age story. Cam's home life is not great and she's spent her whole life trying to earn her father's love, even going so far as to apply to his alma mater for college though she has no interest in or aptitude for economics. Her love interest, Brendan, is Paige's slightly younger brother and the target of one of Cam's past misdeeds. Turns out, he and Cam are really great together. There's a lot to like here, with geekiness and Rocky Horror Picture Show shenanigans and lots of those awkward moments where you're trying to sort out if people like you or not. Brendan is something of a marshmallow but he also makes it clear that Cam can't keep lashing out when she's hurting - apologies without a change in behavior mean nothing. The book is entirely from Cam's point of view, so one of the most interesting bits is watching her navigate different friendships.

Even though you'll probably yell at Cam a few times, this book fits neatly in that fun but compelling read category. It's not pure fluff, but not so heavy that you'll dread picking it back up. The ending wraps things up nicely, but it's clear that some friendships are broken and that Cam's relationship with her father will never get better. Overall, a recommended read and I look forward to more from this author duo.