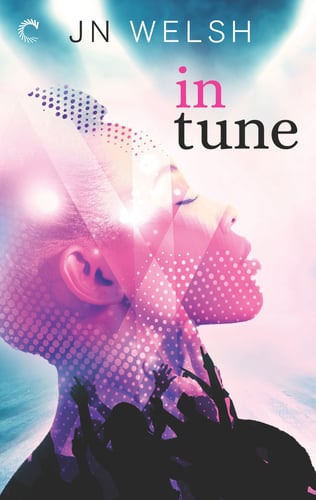 Review: In Tune, by JN Welsh

The first in what I hope is a series, JN Welsh's In Tune is an enemies-to-lovers romance set in the Electronic Dance Music (EDM) scene. The hero, Luke, is a DJ from Chicago who is embarking on a world tour and needs someone to manage him. (Though Luke isn't from the Netherlands, I pictured him as Afrojack, complete with soul patch.) The heroine, Leona, is on a year-long break from the business after a horrible breakup with a producer named Paul Reeves. Her boss and longtime friend, Abe, pulls her back in because Luke's agent wants Leo to manage the tour and Abe's business is in financial trouble.

The problem? Luke's had a bad experience with Paul himself. Paul was supposed to produce on his last album and not only messed up his sound, he ran off with Luke's fiance (and at-that-time manager) and a bunch of money. So Luke hates Paul and associates Leo with him. Leona hates Paul and associates Luke with being bullied back into the industry that gave her panic attacks for months.

This doesn't stop the two of them from being attracted to each other, though. *evil laugh* Leo is a chic, sexy Black woman with enviable style and she's really good at her job. Like SO GOOD. She's also kind and is a great leader, something I don't think we get to see heroines doing enough of in fiction. She leads with encouragement and precision, careful planning and working right alongside a team that trusts her implicitly. Can you tell that I loved Leo? Yeah, I really did.

Luke acts like a bit of an ass at first, but he quickly realizes that Leo isn't Paul 2.0 and that she doesn't like Paul anymore than Luke does. Once she proves herself, he lets himself trust her and things progress how you might expect. The pair has great chemistry and their dialogue is one of the best things about the book.

A few other things that stood out for me:

- Setting this book in the EDM scene makes it familiar to readers of rockstar romance, but still refreshing and different.

- Luke is not an a$$hole rockstar. He loves his family and loves his fans. He's an artist, but not a tortured one.

- No drugs! I know this probably makes me a grump, but I was really glad that Welsh didn't lean into the rave scene for this book. Things are professional and I wasn't worried that anyone was going to die from an overdose during the book. (This is not a subject I like reading about for a variety of reasons.)

- The sex is hot, but the stolen kisses and pining and "we can't do this" were just as compelling.

If you're wondering if the book will make sense to readers who aren't familiar with EDM, it will. There are some aspects that I think EDM fans will appreciate, but for the most part, it's a musician romance with great characters and a fresh voice. The writing is a bit clunky in places, but I found myself smiling while reading and I can't wait to read whatever JN Welsh gives us next.