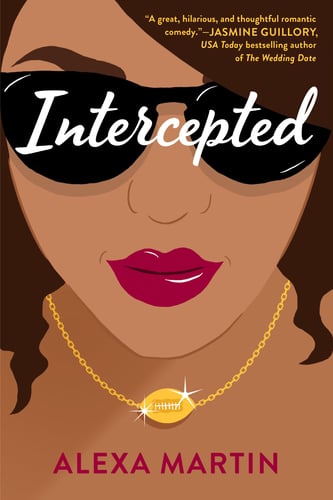 Intercepted is a tricky book to review because there were things about it that I adored and things (characters, really) that made me want to claw my eyes out. So, instead of doing a rant or a rave, I'm going to try to help you figure out if you'll enjoy reading it. Sound good? Let's go.

Intercepted is the story of Marlee and Gavin. And professional football. Marlee, our narrator, starts off the book with her boyfriend of a decade, both of them living in their hometown of Denver. The boyfriend plays for the "Mustangs," a fictionalized version of the Broncos, and he's a Grade A jerk. He takes Marlee for granted, cheats on her, treats her like garbage, and isn't willing to propose to her after 10 years because...? I hated him, and you will too.

Thankfully, Marlee's one-night stand, Gavin, from when she was on a break with The Jerk, gets picked up by the Mustangs as their new quarterback. The Jerk is all kinds of annoyed, because he doesn't get along with Gavin and because his position on the team is sort of dependent on the current QB.

Team politics abound, but that's nothing compared to the Football Wife politics. Here's where a bunch of my Twitter friends expressed displeasure, with the many catty, backstabbing, racist, awful women in the book. Marlee is a biracial woman, and some of the wives are clearly racist. (Her best friend is also biracial. Gavin is white.) Alexa Martin, the author, is herself a biracial football wife, so I chose to read this with that in mind. If she had just made up a big group of terrible women, I'd be more inclined to cry "misogyny!" but sometimes women really are awful. Especially rich, entitled women eager to maintain their positions in a hierarchy that is still dependent on men. It's complicated.

The romance is great, and Marlee's conflict (I will never date another football player) is genuine. There's a twist in the Black Moment that I'm not going to spoil for you, but I think it was handled well. Nothing is wrapped up with a neat bow, and everyone has to work for their HEA.

The real selling point of this book is Marlee's voice. This book is laugh-out-loud funny. I wanted Marlee to be my best friend, but Martin also wrote her a great BFF. In fact, there are three really wonderful women in this book (Marlee, her BFF, and her boss), and to me they countered the awful ones.  There are also a couple of great men - Gavin, of course, and TK, who's the hero of the next book!

In all, I really enjoyed Intercepted. The pacing is off in a few places, but I liked Marlee so much (and Gavin, who's a complete cinnamon roll) that I was willing to read all of the crap that the football wives put her through. I cheered for her successes and I craved that HEA. I'm looking forward to Martin's next romance.

Content Warnings: Misogyny and racism directed at the heroine, cheating.