Top Off Your TBR: January 2021 Edition

This is the first TBR list of the new and way-less-awesome Love in Panels. Just me. Hopefully there are still some books in here to top off your TBR! 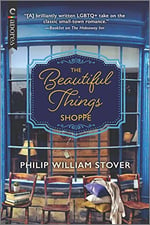 Why I Want to Read It - The first in this series was a pleasant surprise for me in 2020 (as opposed to all the other surprises). Stover used a return-to-hometown romance to explore toxic masculinity in the gay community and ideas of forgiveness and reinvention. Anyway, I'm looking forward to this one because I fell in love with the small, quirky town and I'm eager to spend more time with these characters.

Nine tales of magic, love, and a little fairy dust: A military posting at the Rapunzel Tower to avoid war in The Tower; a Brownie that just wants to do something right in Cleanly Wrong; a dream of love unfulfilled in A Heart’s Dream; saving the victims of an evil witch in The Red Apple Witch; a boy who just wants to go to the ball in Cinder-Elle; a cursed kingdom and search for lost love in The Curse; a thief and his fairy godparent with different ideas about love in Happily Ever After; a lightning strike, a lost egg, an ancient battle, and love at first spark in Thunderbird; and a prince trapped, knowing his true love will never save him in The Beast.

Why I Want to Read It -  This anthology is from one author, so I'm hoping I click with their voice because I love queer fairytale retellings. NineStar has published a bunch of multi-author anthologies but they're not for sale anymore, which is really sad because I'd love to recommend them to you!

After losing her mom to a heart attack, dumping her small-minded boyfriend (she’s bisexual, not confused) and reluctantly moving to the US to be near her dad - all in the span of eighteen months, twenty-three-year-old Farah has hit the full quota on LIFE. Two things keep her going - her internship with a brilliant statistics professor and the possibility of meeting her dancing idol through the Bollywood Drama & Dance Society.
That is, if her new hot-mess housemate will let her.

Soon Tara and Farah are bonding over chicken biryani, dancing to Bollywood Beats at midnight and kissing... against all the odds. And maybe beginning to realize that while life’s even more complicated than math, love is the one variable that changes everything!

Will they realize that together they have the recipe for a Happily Ever After?

Why I Want to Read It - F/f grumpy/sunshine! New-to-me author and heyyyy bisexual rep, let's do this!

As always, some of these are titles I'm personally looking forward to reading and some are books I think some of you lovely folks might be interested in.

All titles in red are links to Amazon.

January 1 - Scandal in the VIP Suite, by Nadine Gonzalez

January 1 - Running Away With the Bride, by Sophia Singh Sasson

January 5 - The Ballad of Hattie Taylor, by Susan Andersen

January 12 - The Worst Duke in the World, by Lisa Berne

January 12 - Across the Green Grass Fields, by Seanan McGuire

January 12 - The Ruthless Lady's Guide to Wizardry, by C.M. Waggoner

January 12 - Into the Heartless Wood, by Joanna Ruth Meyer

January 25 - The Golden Gryphon and the Bear Prince, by Jeffe Kennedy

January 26 - Then There Was You, by Mona Shroff

January 26 - A Vow So Bold and Deadly, by Brigid Kemmerer