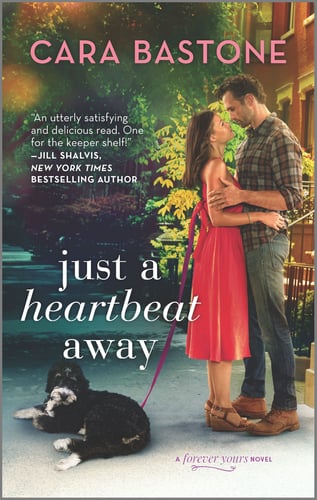 Some people change your life
Others change your heart
Newly widowed dad Sebastian Dorner was unraveling at the edges—until his son’s teacher, Via DeRosa, threw him a lifeline. Now, two years later, they reconnect at Matty’s new school, and an inconvenient but unmistakable jolt of attraction crackles between them. But why does the first person to spark with Sebastian in years have to be a millennial? Is twentysomething Via really too young for him or does fortysomething Sebastian just feel too damn old?
A former foster kid, Via’s finally forged the stable life she’s always dreamed of—new job, steady income, no drama. The last thing she needs are rumors about her and a single dad at school. But why does she keep being drawn into his capable, worn-flannel orbit? And why does being around Sebastian, Matty and even their dog, Crabby, seem to spark so much want?
They’re trying to ignore the tension threatening their friendship. But sometimes what’ll heal you is just a touch—and a heartbeat—away…

Let me start with the positives. I really liked the initial meeting between Via (short for Violetta) and Sebastian, Matty’s father. Via is Matty’s preschool teacher and they meet soon after Sebastian’s wife dies in a car accident. He’s completely lost in his new role as a single dad and Via very gently pushes him to become the father Matty desperately needs. They reconnect two years later when Via gets a job as the new school counselor at Matty’s school.

Throughout much of the book, Via is in a long term relationship with her live-in boyfriend, Evan. There is no cheating in this book and the two break up long before Via and Seb share their first kiss. Evan is portrayed as this typical Brooklyn hipster, slightly aimless and lacking in professional ambitions and more than willing to live off his parents’ money. This is clearly a way to delineate all the ways in which Sebastian is more mature and has his life together and is a far better romantic option for Via. I don’t particularly love the trope where the ex partner (or in this case, the soon to be ex partner) is diminished in order to make the new love interest look better but in this situation, it only works partly because of the age gap. Sebastian, for much of the book, is very hung up on the fact that he’s significantly older than Via and thinks that the younger, hipper, hotter Evan is a much better fit for Via.

Via, for her part, has suffered losses in her own life. Orphaned at a young age, she bounced around the foster system before finding a permanent home. She hates the idea of being alone and feeling lonely and I think part of my problem with this book is that there is so much time spent showing how alone she feels that in some ways, it’s difficult to tell whether she truly falls for Sebastian or whether she loves the idea of finally belonging to someone and being a part of a family.

It is possible that both of those things could be true and certainly, there’s no doubt from the writing that she’s very attracted to Sebastian which leads to my second issue with the book. The number of times the author mentions how big Seb is and how tiny Via is comparatively, is absurdly high and almost amusing by the end. I get it. He’s big and tall and she’s tiny. She likes how tiny she feels in his arms. It felt unnecessary and pointless to me that it was mentioned so many times.

In short, I really liked the characters, the main ones and the supporting ones. I loved how the author managed to write a romance set in Brooklyn and make it feel like a small town romance. However, I felt the actual romantic aspects of this slow burner to be a bit lacking especially because for much of the book, Via was still with Evan. But still, Just a Heartbeat Away is not without its charms so if you’re looking for a quiet, sweet, extremely slow burn romance, this would definitely hit the spot.

Melanie received a copy of this book for review from the publisher.