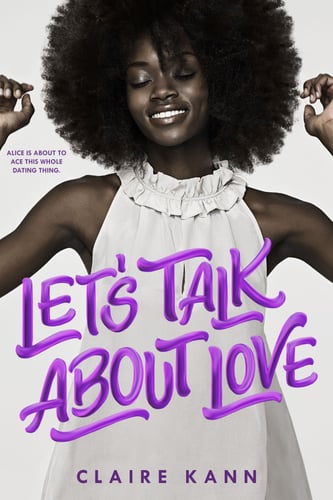 Striking a perfect balance between heartfelt emotions and spot-on humor, this debut features a pop-culture enthusiast protagonist with an unforgettable voice sure to resonate with readers.

Alice had her whole summer planned. Nonstop all-you-can-eat buffets while marathoning her favorite TV shows (best friends totally included) with the smallest dash of adulting―working at the library to pay her share of the rent. The only thing missing from her perfect plan? Her girlfriend (who ended things when Alice confessed she's asexual). Alice is done with dating―no thank you, do not pass go, stick a fork in her, done.

But then Alice meets Takumi and she can’t stop thinking about him or the rom com-grade romance feels she did not ask for (uncertainty, butterflies, and swoons, oh my!).

When her blissful summer takes an unexpected turn and Takumi becomes her knight with a shiny library-employee badge (close enough), Alice has to decide if she’s willing to risk their friendship for a love that might not be reciprocated―or understood.

Claire Kann’s debut novel Let’s Talk About Love, chosen by readers like you for Macmillan's young adult imprint Swoon Reads, gracefully explores the struggle with emerging adulthood and the complicated line between friendship and what it might mean to be something more.

So, this book... I have a mess of thoughts on it. And I have a lot of content warnings, and if you too are on the asexuality spectrum and want to read this book, my content warnings for you are at the bottom. There’s a lot to take in and process.

But here’s a TLDR review: LET’S TALK ABOUT LOVE presents an asexual heroine trying to understand herself while her friends are terrible, and the book barely examines that fact. It promotes a harmful infantilizing stereotype, but also has some lovely and insightful moments with her love interest.

To start at the beginning, LET’S TALK ABOUT LOVE is a book about a biromantic asexual woman (Alice) discovering what romantic attraction feels like for her. It’s also a story about friends and the messiness of those relationships, especially when you are no longer a kid, but only sort of feel like an adult. This is a new adult story in that frustrating 19-year-old way.

If you’re allosexual and you’ve ever wondered what someone who is a-spec (and alloromantic) fears when it comes to a romantic relationship, the book opens there. Alice is immediately dumped by her girlfriend and roommate because Alice does not want to engage in sex the way Margot, the girlfriend, wants. Margot says every possible hurtful thing she can by essentially asking if Alice is broken and needs to be fixed. It’s a gut punch. Almost every insecurity and expectation of not being believed or understood by a romantic partner is written in those pages, which makes it feel more like a primer for an allosexual reader than something for an asexual reader.

However, there’s more. The book presents Alice’s friends Feenie and Ryan as great friends, but I’d argue that they aren’t. Ryan is sort of blank probably to make room for the volatile Feenie. And the books tells us repeatedly how great Feenie is, how she’s Alice’s soulmate, and so on, but I read a very toxic friendship. While Feenie supported Alice in high school against bullies and is one of two people who know that Alice is asexual, she’s remarkably self-absorbed to borderline cruel. The book turned against me the moment Feenie announced that she had a plan for Alice that included sex. Hold that thought.

So, shortly after being dumped, Alice meets Takumi at work and has a very intense reaction to him. She’s immediately confused because these feelings are different and strong and scary. Takumi likes Alice because she’s cute, but Alice is only ever rude to him at this point because she cannot process her reaction to him. And so she tells Feenie, who says:

“I’ve been waiting for this. I have a plan and it needs sharing... I think this is going to provide a perfect opportunity... To sleep with him, of course. You need to have sex with him.”

Dear reader, I read that a week ago and I’m still furious. Alice is frustrated by this, lets her friend say “maybe you’re graysexual,” and then allows the overbearing and controlling Feenie to present her plan. Friends having ideas are fine, friends defining what Alice needs to do are not fine. Friends trying to fix their asexual friends are the worst. And the “wisdom” of Feenie is never challenged. She is as clueless and hurtful as everyone else.

And let’s pause for a moment to discuss the depiction of Alice. In short, almost everything about Alice feels infantilized, but I was a teenage girl once and the world tells us to act cuter and more innocent than we feel. So how much is really Alice and how much is society? It’s so hard to criticize here because for everything I say, there’s the side argument “but she’s nineteen.” So, is this accurate for a college freshman? Maybe. My bigger issue is that the allosexual world tends to view a-spec folks as innocent and sheltered and in need of protection from the mean, sexy world. And the thing is, we aren’t that (we know how to navigate the default allosexual world because we can’t escape it). Innocent, sweet, and cute Alice just promotes the stereotype of the childlike asexual, but she’s nineteen.

Surprisingly, I don’t have a lot of complaints about Takumi.* He’s kind and generous and patient. He never pushes Alice for more, never demands what her previous boyfriend and girlfriend did. They are good friends to each other. And the moment Alice finally tells Takumi that she’s asexual and loves him, he reacts gently, but with caution. Some might argue that Takumi is terrible for not saying “I love you no matter what” immediately, but I appreciated his pause. Consideration is in the pause. (There’s an HFN, don’t worry.)

Back to the “friends.” For reasons that the text and Alice never really challenge, Feenie becomes jealous of the friendship between Alice and Takumi. Communication between Alice and Feenie shuts down until there is a major fight. All of this is reasonable with the “but she’s nineteen” argument, except the book pretends that all of those issues and jealousies are resolved when only the grievances have been aired. There are so many instances of Alice’s friends being bad friends that my sincere hope is that she finds better friends after the book.

So, yeah. I’m not going to say that the asexuality representation was handled well, but it wasn’t the worst I’ve seen. The beginning was so rough that I believed it would only get worse. And now that I’m at the end of this review, I realize that there isn’t much plot to LET’S TALK ABOUT LOVE, which isn’t a complaint, but is a note.

* This book was part of a sort of crowdsourced competition, so there are reviews on Goodreads that reflect an earlier and much more problematic book. The published book has corrected a lot of the issues with Takumi. There was a moment when I wondered if he was grooming her in a creepy way, but that went away.

If you are on the asexuality spectrum, here’s what I want you to know before you read this book: