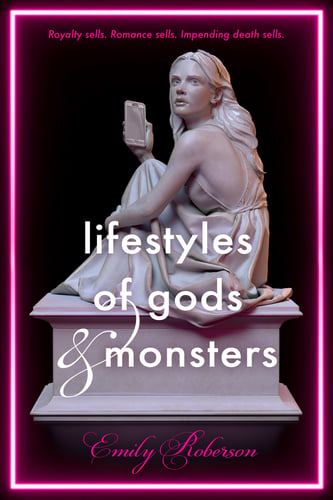 If you were obsessed with Greek mythology as a kid, Lifestyles of Gods & Monsters will have you riveted even as you want to look away. The myth of Adriadne, Theseus and the Minotaur is a common enough story that you may go into this book with a vague idea of the narrative. The twist, however, is that this is a retelling set in a vaguely modern Crete, complete with both Gods and Monsters and cell phones and social media. And reality TV. Ariadne's family has been organizing and hosting a yearly competition in which fourteen young competitors from Athens try to kill the Minotaur one at a time. This has gone on for ten years and no one has been successful. They air it like any good reality TV show, complete with parties and dramatic pyrotechnics, and an arena of blood-thirsty fans.

One day, Theseus, Prince of Athens, arrives. And then he decides to compete, working out a secret plan with Ariadne's father to replace one of the selected competitors. Too bad Ariadne has already fallen for him. I'm choosing to read this as a romance, but the ending is ambiguous, so bear with me till the end and I'll give a few spoilers so you can choose accordingly.

Ariadne is the only one who can calm her little brother, The Minotaur (Asterion). Her role in the TV spectacle is to guide each competitor to the maze. That is, until her father catches wind of her relationship with Theseus and decides that she needs to have a bigger role in the show. Her older Kardashian-like sisters have their own show that airs during the year while the competition is in hiatus, but Ariadne has never been forced to do the things they do. In fact, she thinks they like it, and there's a whiff of "not like other girls." This is subverted later in the book when Ariadne realizes how horrible their parents are, how none of them have any choices, and how her sisters are actually taking a whole lot of pills to get through the sex tapes and parties.

As for the romance, Minos is a terrible human and he insists on Ariadne giving her virginity to Theseus ON VIDEO for the sake of ratings. (This doesn't happen, thank the Gods.) We learn all his secrets and truths along with Ariadne, though some (the Gods have nothing to do with his demands) are clear to the reader. The relationship between our two young main characters is allowed to grow at a natural pace, with some insta-love elements but nothing out of the scope of the rest of this bananas book. I stayed up until 1:30 am to find out how they'd make it work and how Ariadne would choose between her brother and her first love.

If you like the over-the-top characters and stories in classic Greek mythology, you'll probably enjoy this young adult retelling. It's a bit like a romantic car crash... you can't look away.

Content Warnings: the Minotaur eats people (this is the R-Rating), drug use, sexual coercion (not by the hero), bestiality? (Pasiphae has sex with a bull off-page and that's how the Minotaur comes to be), child abuse, terrible parents, suicide

Spoilers: In the end of the book, Theseus and Ariadne escape from Crete and head for Athens. Minos has threatened war on Athens if Ariadne isn't returned, so they agree to drop her on one of the many tiny islands not affiliated with either country. They promise to keep in touch, they'll be together again, etc. If you are an optimist like me, you'll choose to believe this is how it works out. However, as Ariadne is settling into this new life, she makes some friends and meets.... Dionysus. In some of the myths, Ariadne and Dionysus end up married, so who know what's going to happen? All I know is that there had better be a sequel, dammit. I don't even mind if there's a love triangle. (Because I am trash and love love triangles.)