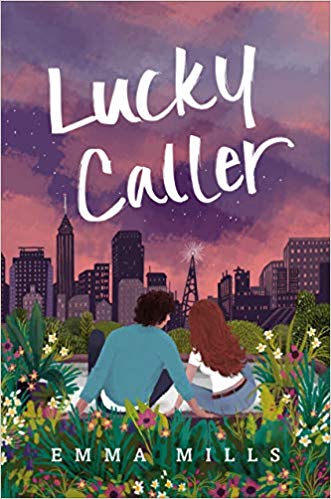 With the warmth, wit, intimate friendships, and heart-melting romance she brings to all her books, Emma Mills crafts a story about believing in yourself, owning your mistakes, and trusting in human connection in Lucky Caller.

When Nina decides to take a radio broadcasting class her senior year, she expects it to be a walk in the park. Instead, it’s a complete disaster.

The members of Nina's haphazardly formed radio team have approximately nothing in common. And to maximize the awkwardness her group includes Jamie, a childhood friend she'd hoped to basically avoid for the rest of her life.

The show is a mess, internet rumors threaten to bring the wrath of two fandoms down on their heads, and to top it all off Nina's family is on the brink of some major upheaval.

Everything feels like it's spiraling out of control―but maybe control is overrated?

In Lucky Caller, Emma Mills pairs a friends-to-lovers relationship arc with the story of a complicated family on the brink of change. Nina and Jamie, her childhood friend and neighbor, are both taking a radio class in their senior year of high school. Jamie and Nina were best friends until middle school, when *spoiler* happened and now they're 2 members of a 4 person team working on a show together. Nina's father is a famous radio show host who moved out to LA a few years earlier, but she'd rather be producing than hosting so another member of the team, Joydeep is the voice of the show-- together with Sasha, a bit later. The show is off to a rocky start until they play a couple of songs by a cult favorite grunge band, Existential Dead. Improbably, they attract a small following of Existential Dead fans and when they announce a special guest (Nina's dad) without saying his name? Those fans think the reclusive lead singer of the band is the special guest and hijinks ensue.

Lucky Caller is funny and heartwarming, with radio shenanigans offsetting Nina's difficult relationship with her absent father and her confusing relationship with Jamie. If that weren't enough, Nina's mother just got engaged to a man that she and her sisters all like and, while they are happy about the change, it's still a change. Realizing that they'll be moving from the apartment in which they've lived all her life is unsettling--literally. Nina's older sister is also struggling at college, afraid she's lost her love for art because turning it from a hobby into a vocation is not going well. (Relatable *sob*) At the threshold of graduation and adulthood, Nina is forced to confront her feelings about her dad, Jamie, and her family... but the book never feels too heavy.

Jamie is a charming love interest. A good friend, a loving grandson (he lives with his grandparents), and a stabilizing force on the radio show. His relationship with Nina's younger sister was especially telling, because the way an older kid treats younger kids is usually a good indicator of their character. There's a scene in which the girls' dad has just left and the youngest sister is bitter and lonely and asks everyone to play Kingdom--a roleplaying game they made up as younger kids--one last time. Jamie shows up dressed in character and willing to literally throw himself into a pool to make her's wish come true. I think it was that moment when I, the reader, decided he deserved every happiness in the world.
While I don't think Lucky Caller does anything particularly original or inventive, it was a pleasure to read and I made many good-book noises as I stayed up past my bedtime to finish it.

Content Warnings: divorce, hospitalization of a loved one, past: Jamie's parents lost custody of him (reason not given)