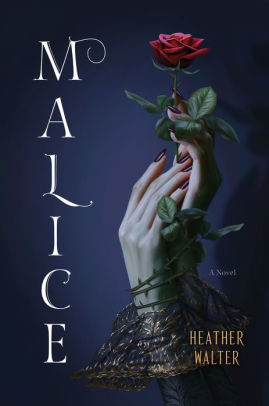 If you'd like to purchase this book, please consider using one of these links to support the site: Amazon, Barnes & Noble, Bookshop, Kobo, Libro.fm

A princess isn’t supposed to fall for an evil sorceress. But in this “bewitching and fascinating” (Tamora Pierce) retelling of “Sleeping Beauty,” true love is more than a simple fairy tale.

“Walter’s spellbinding debut is for all the queer girls and women who’ve been told to keep their gifts hidden and for those yearning to defy gravity.”—O: The Oprah Magazine

Once upon a time, there was a wicked fairy who, in an act of vengeance, cursed a line of princesses to die. A curse that could only be broken by true love’s kiss.

You’ve heard this before, haven’t you? The handsome prince. The happily ever after.

Let me tell you, no one in Briar actually cares about what happens to its princesses. Not the way they care about their jewels and elaborate parties and charm-granting elixirs. I thought I didn’t care, either.

Until I met her.

Princess Aurora. The last heir to Briar’s throne. Kind. Gracious. The future queen her realm needs. One who isn’t bothered that I am Alyce, the Dark Grace, abhorred and feared for the mysterious dark magic that runs in my veins. Humiliated and shamed by the same nobles who pay me to bottle hexes and then brand me a monster. Aurora says I should be proud of my gifts. That she . . . cares for me. Even though a power like mine was responsible for her curse.

But with less than a year until that curse will kill her, any future I might see with Aurora is swiftly disintegrating—and she can’t stand to kiss yet another insipid prince. I want to help her. If my power began her curse, perhaps it’s what can lift it. Perhaps together we could forge a new world.

Nonsense again. Because we all know how this story ends, don’t we? Aurora is the beautiful princess. And I—

I am the villain.

This review contains a couple of mild spoilers.

Like me, a lot of folks in my corner of the reading world have been eagerly anticipating Heather Walter's Malice, a sapphic Sleeping Beauty retelling centered on the character of Maleficent, this time called Alyce. In the human kingdom of Briar--ruled by Aurora's family--a few magically gifted girls are born each year. They're called The Graces and they can bless others with their particular talent by adding a little of their golden blood to an elixir. Beauty, wisdom, music... seeing a theme here? Alyce is called The Dark Grace, because she isn't a Grace at all but she still has magic and can use it in the same way the Graces can. Except her gifts come from her parentage and she can only use them to cause harm.

Half Vila and half Shifter, Alyce is mocked and reviled her whole life, even as she is forced to provide services to the populace. Kept in Houses, the Graces and Alyce are compelled by law to serve the public. Any money they make is taxable and shared with their House and the Crown before being added to their own savings for when they eventually "fade" and lose their magic. So Alyce has been forced into service and treated horribly by everyone for pretty much her entire life.

And yet, she holds on to some inner goodness and hope. Told entirely in her perspective, Malice starts out quite slow and gives a deep look at Alyce's past and present life and character. One revealing event is when her house-mates intentionally leave her behind when they go to a ball at the palace. With the help from her only friend, she eventually gets there and wears a beautiful disguise that allows her to live like a Grace for a few hours. Until her tormenter, Rose, strips off her disguise in front of everyone and shames her horribly. As the story continues, Rose becomes a representation of everything this society stands for: vanity, cruelty, self-interest and a determination to win at the game instead of tearing down oppressive structures.

Despite a slow start, Malice does pick up and the second half is an emotionally turbulent adventure full of twists and betrayals. Yes, Alyce and Aurora fall in love. But as the cover copy suggests, this isn't a Happily Ever After... yet. Alyce is the villain, after all (there are several villains). I won't spoil the ending, but I will say that Aurora doesn't die and either does Alyce. Alyce discovers the source and nature of her power, eventually embracing it and burning everything down (metaphorically but also kind of not).

Malice lived up to my expectations, which is to say that it isn't a genre romance but rather a retelling with a sapphic love story and a morally gray protagonist. This is book one of a planned duology and I'm hopeful we'll get that HEA.

- I read an audio copy and enjoyed the narration. Ann Marie Gideon does a great job capturing the full range of Alyce's emotions.

- Despite what Goodreads will tell you, this is not YA! Stop tagging adult fantasy as YA just because it's written by a woman. ARGH. The characters are 20-ish.

- There is one on-page sex scene and several kisses. Additionally, Aurora has been forced to kiss strangers since she was eight years old, in hope of finding her "true love" and breaking the curse that says she'll die at 21.

- Alyce is not pretty and never becomes pretty. Instead, Aurora loves her just as she is. There's power for Alyce in embracing her appearance, green blood and all.

- As mentioned above, there are several villains, including some thought to be allies. I found some minor plot holes here but sort of waved them away because I enjoyed the rest of the story.

In all, a satisfying story with a misunderstood protagonist, a sapphic love story and a lot of revenge. Fans of Wicked, Angelina Jolie's Malificent and the queen from Once Upon a Time will enjoy this, but if you want a capital-R Romance, don't expect it from this first volume.

I received an audio copy of this book from the publisher for review.

If you'd like to purchase this book, please consider using one of these links to support the site: Amazon, Barnes & Noble, Bookshop, Kobo, Libro.fm