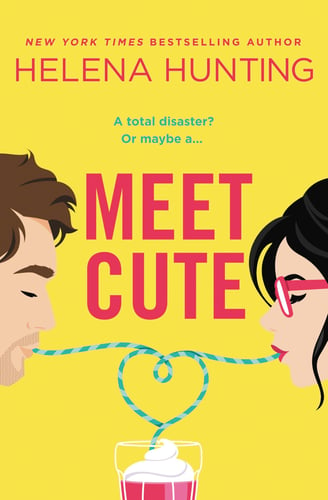 Meet Cute is one of those books with a cute cartoon cover that disguises some serious subject matter within. I'm starting to get used to these, but it still throws me if I don't carefully read the blurb. In the prologue, we meet Daxton and Kailyn, both attending law school together. The title refers to their first and second meetings, in which Kailyn walks right through Daxton's frisbee game and then spills coffee all over herself when trying to get into the seat next to him in class, the only seat available. Oh, and Daxton just happens to be the star of Kailyn's favorite teen drama of all time, so she fangirls and then is horribly embarassed. (He's essentially Dawson from Dawson's Creek.)

Fast forward to the present, when Kailyn is a successful lawyer and handling a new trust being set up for Daxton's much younger sister, Emmy. Then Daxton's parents die in a car accident and everything changes. Dax gets custody of his younger sister (she's 13 and he's like 32) and Kailyn is put in charge of Emmy's financial affairs when their aunt sues for custody. It's pretty obvious to the reader that the aunt is a shady character, but she does a whole bunch of shady things to try to get custody of Emmy and access to her money.

Kailyn ends up saving the day several times and her position with Emmy results in a lot of forced proximity. Sexy times between the adults, plus some humor and brother-sister bonding. There's grief and lots of legal stuff, but the relationship develops at a good pace and I thought the 13-year-old was given more depth than most kids in romance novels.

Overall a good read, but I think you'll have to suspend your disbelief a bit. How are they in LA and there aren't any non-white people? Hm. Why didn't Kailyn immediately go through the aunt's financials with her position as conservator? It felt like due process that should have been happening during the whole custody battle, since the aunt was trying to paint Dax as irresponsible and only out for the money. I also really resented the idea that everyone thought a 32 year old wasn't capable of raising a child. (Personal bias - I'm 32 and have an 8 year old and a 5 year old. I think I do alright.)

Bits of humor and the chemistry between the main characters make this a mostly enjoyable read.

Suzanne received a copy of this book for review, but ended up buying and reading it on audio.