Mini-reviews of Irises in the Snow, A Hive of Secrets and Spells, Night of the Scoundrel, and We Met in December, which means an f/f fantasy-mystery, an m/m contemporary, an m/f historical and an m/f contemporary. 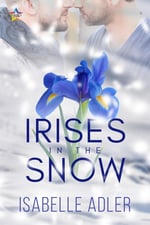 Irises in the Snow, by Isabelle Adler
Margrethe says: YMMV

Irises in the Snow is a low to moderate angsty, second chance romance. It’s pleasant and kind, but felt really limited by the novella length. The book spends little time developing the relationship, both past and present, between Justin and Elliot. They were high school sweethearts who intended to leave Indiana and go to art school in Los Angeles together, but Justin stayed home because his father was diagnosed with cancer. The boys broke up as a result, but after five years apart they never seemed to move on. When Elliot returns, it’s to remove things from his childhood home after his parents have died. And through Justin’s meddling mother, they end up spending days around Christmas together.

My complaint is that I almost have a clearer sense of who Justin’s annoying aunt is than who Elliot is. What is it about Elliot that makes Justin miss and resent him so? What is it that they love about each other? How do they express their affection for each other outside of grand gestures? There is really only one scene that draws you into their world when they open up about their past, but this ends with the black moment. It is a story that feels really constrained by its length. There is no time spent to develop the reason why these two belong to each other. And really, I read romance to linger in those moments of closeness, which this book barely provided.

Margrethe received a copy of this book from the author in exchange for an honest review.

A Hive of Secrets and Spells, by Ellen Jane
Margrethe says: DNF, YMMV

This book is the second in a series and it was obvious while reading that I needed to read that first book to understand the worldbuilding and to be invested in the central relationship. Heather is a witch and starting a private investigation business, and Siobhan is a sorcerer (the difference is about the sort of magic they can perform, this was not really explained by 40% when I stopped reading). They’ve been dating for a few months after solving a murder together. And then Siobhan’s brother enters her life and together they investigate the disappearance of Siobhan’s birth family.

My biggest problem with the book is that I never felt engaged by the story or characters. And the relationship, instead of representing a romance, was an established couple deciding whether or not to move in together. There was no sense of them as a couple, they behaved more like roommates (even though they don’t live together). Then, because all of the worldbuilding was done in the first book and not really shared with book two readers, it was confusing and stilted. The mystery was developed in a way to draw the reader in, so I never felt any urgency towards it.

Content warnings: given up for adoption, separated siblings, kidnapping

Margrethe received a copy of this book from the author's PR firm for review.

Night of the Scoundrel, by Kelly Bowen
Suzanne says: Pass

I’ve never been so disappointed in a book by Kelly Bowen.

Content Warnings for this book and this review: childhood sexual abuse (in the past and on page), murder of a child (in the past), childhood incarceration in Bedlam, murder, references to a different set of rapes for which the heroine is seeking justice (on behalf of someone else)

A novella is tricky to pull off and not only did King deserve a full novel, there’s a child sexual abuse plot that isn’t handled with care. I am beyond tired of pedophilia being the “big shocking reveal” at 80%.

Not only is there a present-day scene in which a boy is chained to a wall and attacked by the villain, then stabbed by the boy (villain bleeds out), but we go right from that scene into the only sex scene in the book. Everyone deals with trauma differently, so I’m not going to say that it’s impossible for them to have wanted to have sex, but it IS impossible for me to want to read sex after reading about child sexual abuse. Again, the length of a novella does not provide adequate space for handling this kind of content.

Oh, and of course King is actually supposed to be a Baron but his parents faked his death  for “lying” about the uncle abusing King’s brother for years. So then the uncle inherits. Sigh.

I did appreciate that King says “I believe you” over and over to the boy, because no one ever believed him and he knows that’s important. But otherwise, Bowen could have generated King’s backstory without the sexual abuse. It was 100% unnecessary. King's brother was murdered and the uncle framed him, that's plenty of trauma and if the sexual abuse is that easily removed from the plot... why is it there?

I liked the heroine. 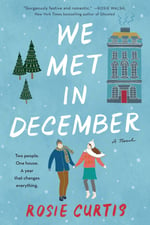 We Met in December, by Rosie Curtis
Suzanne says: Read it Eventually

This is a soft, slow burn romance that reminded me of The Flatshare and One Day in December. Like both books, it's set in contemporary London. Like The Flatshare, the romance is between two roommates and one is a male nurse. Like One Day in December, the day they first meet they immediately connect, but forces keep them apart. In both books, the characters pursue other romantic relationships while orbiting each other.

This book lacked much in the way of tension and the relationship between the two main characters grows more as a friendship with attraction that they won't act on. It's very will-they-or-won't-they, but it does have an HEA. I'd recommend it for people who liked those other two books and who don't mind if the main characters are in other relationships (no cheating) at times.

Content Warnings: grandmother is hospitalized, her dad isn't in the picture and her mom is a bit of a narcissist