More mini-reviews! Reviews of I Wanna Be Where You Are, Happily Ever Afters, The Sweetest Fix, Lore and Of Wicked Blood.  That's two f/m contemporary YA romances, an adult f/m contemporary romance and two YA fantasy novels with romantic elements.

I Wanna Be Where You Are, by Kristina Forest
My Verdict: Read it Soon

I should have listened to all the people in my online life who told me to read this adorable YA romance months ago. Luckily, books don't usually expire and this was waiting for me when I needed it! Chloe and Eli fell apart (it was messy) after growing up together, but now they're on a (not-parent-approved) road trip to get Chloe to an important ballet audition and Eli to his father's house. It's got all the tropes you might need for a breezy romance: a road trip, only one bed (no hanky panky) friends to enemies to lovers, a bit of disaster and a big farty dog. I Wanna Be Where You Are is a lot of fun and I'm going to bump Kristina Forest's second book way up my TBR list.

I read this on audio and recognized Jeanette Illidge's voice from some adult romances she's read under a pseudonym. I'd gladly recommend the audiobook.

Content Warnings: car accident, messy divorce, death of parent in the past (car accident), mentions of past injury and physical rehab, strained parent relationships, mentions of drug use (alcohol and pot)

Happily Ever Afters, by Elise Bryant
My Verdict: Read it Eventually/Soon

Another fun YA romance, this time with a romance writer heroine. It's tropey and reads like a love letter to romance novels, but it's fresh. Tessa's just started at an art school and moved into a new house. Her neighbor Sam across the street is a talented baker and drives her to school every morning, the handsome rich guy (Nico) in her writing class has hidden depths that call to her. When she loses her writing inspiration, Tessa and her best friend come up with a plan to get it back: find her own happily ever after. Hijinks ensue.

Other than the Black Girl Magic mentioned in the book blurb, Happily Ever Afters stood out to me because of the way Elise Bryant talks about Tessa's disabled brother. One of the things that eventually guides her HEA choice is how the two boys in her life treat him. It's one part "here's how to not be a jerk when talking to or about a disabled person" and one part "here's how someone tells you who they really are." I also appreciated that while Tessa and Nico bond over a secret love of Harry Potter, Tessa at one point mentions JK Rowling's transphobia and Nico again tells her who he is by not caring. I think this is the first time I've read a book that engaged with the duality of being a HP fan and an ally to trans people. I also liked how Tessa's relationships with her former and new best friends were portrayed. Friendship is complicated! And worth it.

There are also lots of donuts, you've been warned.

I received an audio review copy of this book from Harper Audio. 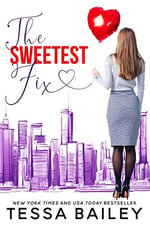 The Sweetest Fix, by Tessa Bailey
My Verdict: Read it Eventually

There's a deception plot here, but it's not because Reese is using Leo, it's because she doesn't want him to think she is. Instead, she's living in a literal closet and spending her days at auditions and classes trying to get a job. I have no idea if any of this is realistic, but that's not really what I came her for so... Anyway, the whole thing takes place over the course of two weeks leading up to Valentine's Day which made it the perfect early February read for my beleaguered brain.

Content Warnings: mentions of fatphobia in the dance world (Leo is fat), Reese's father is either dead or absent (my brain is a sieve, sorry), some stuff about injured feet

I borrowed this book via Kindle Unlimited. 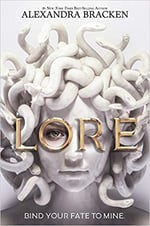 Lore, by Alexandra Bracken
My Verdict: Read it Eventually/YMMV

Lore's the only one left in her family after the brutal murder of her family years prior. She's been doing underground fighting to pay the bills when one day Castor, the best friend she thought was dead, shows up and throws her. Then she finds Athena (yes that Athena) bleeding in the street and makes a pact with her to get them both through the new round of god war. The world-building takes a bit of time to make sense. When I sorted it out, I appreciated that Alexandra Bracken used the characters and myths we know to create this new setup in which the gods have to fight each other every seven years, but...

I'm not sure how much of my enjoyment of Lore is my attachment to Greek mythology and how much is based on the actual book. When I read the first few chapters pre-release, I was totally hooked and requested the full thing immediately. But then I got it and eventually bought it in audio when print failed me after a few weeks. Overall I enjoyed it, even though the end kind of fell apart and some pieces didn't quite come together. Like the romance, which was unnecessary. (If you're going to have a romance, put in the work! Don't just say "hey, they have feelings for each other" every couple of chapters.)

I realize now that this sounds like a negative review and it's not! I can recommend it to fans of Greek mythology and heroines who get beaten over and over--then healed by their best friend/boyfriend/the new Apollo--and keep getting back up. This is a revenge story that works out pretty well.

Content Warnings: murder, murder of children, sexual assault of MC as a young adolescent (vaguely described in a memory, has lingering impacts), rape as a theme throughout which makes sense given Greek myths, terminal illness, lots of violence and fighting, references to girls being raised and sold off to other members of the Agon families as teen brides, lots of other messed up stuff

I purchased this audiobook but received an ebook review copy prior. 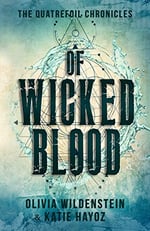 Of Wicked Blood, by Olivia Wildenstein and Katie Hayoz
My Verdict: YMMV

I read this on a whim and while I couldn't put it down, I'm not planning to read the sequel. I love a good treasure hunt and wanted something more coherent and romantic than Master of One. I guess I got it! But I also got a lot of ableism trying hard not be ableism. The (new adult) main characters are Slate, a young man sent away as an infant and raised in the foster care system, and Cadence, the daughter of a professor who just contacted Slate to offer Slate his life history and inheritance. Then Slate activates a curse and can't leave town, plus there are opposites-attract kiss feelings and four magic leaves to find.

I get why people love this book. It sucks you in and it's in France! But it's also heavily reliant on the Evil Disabled Guy Who Wants to Be Fixed trope. So there's that.

I received an audio copy of this book for review.